Okay, now you’ve got your first signature done and your ready to climb up to the next. Think of your signature as steps on a ladder- you have to stand on one to get to the next.

In the first signature, you’ve just entered the inner fold on the last station of that signature. From here your going to drop down and exit the fold by enter the next station DOWN. 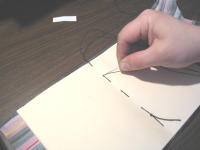 After this repeat the process of sewing up and down the spine and climbing as you just did, for the number of signatures you had.

I’ll load up a page of helpful hints next!