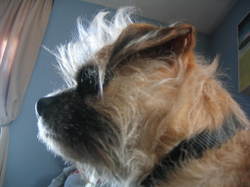 Let me tell you about the new addition to our family, BJ. A little 10
pound mutt we adopted from the Salem shelter. He’s ugly as hell but in
the way that makes him cute. He’s a mix of affenpincher and shitzu or
something. He’s got a naturally occurring Mohawk, funny ears and a
scratchy coat.He’s got a lovable personality, in that he’s playful when
you want him to be and wants to sleep in your lap the rest of the time.
He’s agile and can jump extraordinarily high, which means that in the
car he ends up in the back window and in the house on the back of the
couch.

He’s attentive to what’s happening outside and while on
the back of the couch he looks out the window and growls at people
walking by the house.

He and our other dog Ruby are still
sorting things out as to who is the alpha dog. Ruby isn’t very playful
and BJ is so we’ll see how things are going to go with them. Over the
next week or so we’re going to keep them separated during the day. We
still don’t trust the new guy in the whole house, he’s had a few
accidents and we’d like to avoid any on the couches.

A few
things that we know about him, he belonged to a woman who adopted him
from the same shelter we did but 2 years ago, she started to work 16
hour days and he started to be home with the boyfriend, who wanted
nothing to do with him. So the little dog started to have a lot of
accidents and the boyfriend started to stomp at him a lot. There is a
question as to whether or not the boyfriend was also kicking him. I
don’t see any signs of that, no wincing or startling at fast movements.
Loud noises do bother him a bit but not a lot.

The dog has no
training at all, for instance he doesn’t know sit. HE doesn’t walk
well, and if he’s allowed out the door without a leash he runs for, you
guessed it, the street. We worked on sit tonight and the poor little
guy is so unaccustomed to attention that he was twitchy the entire
time. It’s going to take weeks to train this dog some basic skills and
get him used to being outdoors on the run.

It’s going to be an interesting adventure.