Today instead of a true review you get a bit of a story and some pictures. I'm sure you can deal. Back in the early 2000's I took a figure drawing class. Having taken but one other figure drawing class I decided I needed a set of charcoal in various grades, becaase the set I had wasn't good enough. This is pre-cult of stuff. My coworker and friend Chris told me about this glorious place on I95 in Woburn called Charette*. It contained all things fine art related and was a wonderland of awesomeness. One sunny weekend day I made the trek down the ever dangerous I95, so it's really only crazy dangerous during the week and during rush hour, but don't let that detract from my story. I made my way out of the city and into the dangers of I95 and finally to the office park goodness of Woburn, MA. Only to get lost multiple times trying to find the grail, I mean Charette. I drove around the Office parks, all of which looked exactly the same except for different large block numbers, until I finally found a Dunkin Donuts. Where I begrudgingly bought a coffee (maybe a donut, it was a long time ago) and asked the woman, "Can you tell me where the Charette store is." She gave me some vague directions and after a few more wrong turns, extended waits at long lights I found the right turn and found, Charette.

It was a dumpy little store situated in a dumpy warehouse off the main road and the only indication was a crappy little sign. My coworker's promises of arty goodness seemed as though they would soon be dashed in gloomy office park craptasticness. That is, until I went inside. To the right of the large double door was a copy center and tot he left, art supply glory. I wandered around, my depleted budget crying at the site of Sennelier watercolor sets, sheets of arches hot press and enough fabriano to roll around naked on, I mean, on which to paint tasteful nudes. I wandered, and wandered, and wandered. Places like THIS were why I moved out of the woods and to the city, easy access to less expensive and expensive art supplies that were not grossly inflated in price.

In the end I walked out with a set of Create-a-color leads with a lead holder and a sketchbook. I hated the lead holder that came with it, it was triangular and I never took a liking to it, and ended up using my old charcoal set from college at the figure drawing class. Recently I was at A&C and came upon their loose leads, and thought, "I should dig that out, see if I feel differently about it now." I couldn't find any whole leads, just a few broken pieces, but I did find the holder. I bought a few new leads only to find that I still hated that damn holder. The leads are super cool, all kinds of hardness and charcoal and sanguine. They are just awesome.

Jetpens started to carry a company called E+M who make a lead clutch in a variety of natural and brightly painted colors. I bought a deep blue color and it's lovely. Just a striking deep blue color that begs to be held and used. The clutch is sturdy and really clamps down on the leads, and the creat-a-color leads fit it perfectly, like they are made for it. The clutch is pefectly comfortable to hold and rests in my hand as if made for it. It's chunky and sturdy. It feels as though it can take a beating. 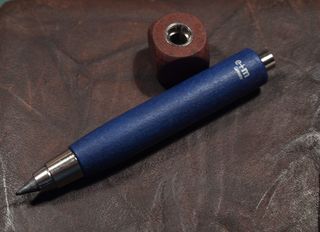 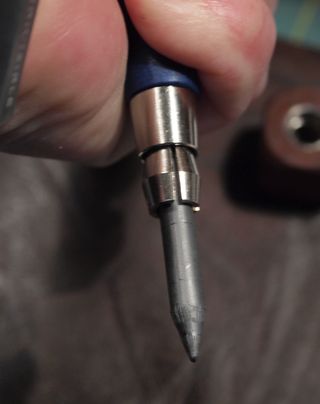 Another item I ordered at the same time is the E+M peanpole**, (heh) or their pencil extender. This time I opted for the bright orange red, which if you have ever driven a Volkswagen from before 2000, you will recognize as the pre-2000 Volkswagen red- a seriously bright orangey red that is striking. I won't lose this peanpole (heh) in my bag anytime soon. Volkswagen red holds a special place in my heart as the first car I learned to use an industrial buffer and buffing compound on was a 1984 Volkwagen Jetta in classic Volkswagen Red. The peanpole (heh) is identical to the General's #205 Pencil Extender, from the metal to the wood, the only difference is where they are made- General's is made in New Jersey and the E+M is made in Germany. The General's is not finished as well and the handle is fixed to the metal slightly crooked but it was 1/2 the price of the peanpole (heh.) Both are nice. All in all I can't wait to put these 2 items through their paces, they feel good and look good too. 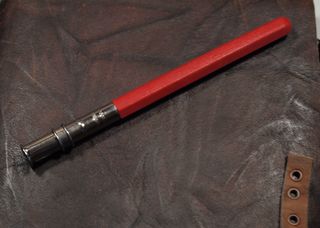 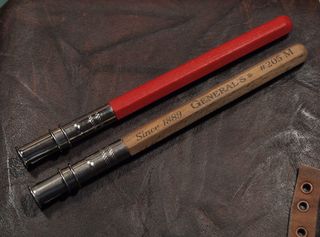 *Sad to say but Charette went out of business when the recession hit. They were bought up by another company which decided to close all of their retail locations and focus solely on the mail order and online ordering aspect. The warehouse where Charette was located is currently for rent.

**C'mon peanpole, really? You KNOW I bought this for the name, right?