I spent much of last week at art therapy camp. Actually it was orientation for grad school for art therapy. No matter what I call it, it was AWESOME. Seriously awesome.

First it was in a place that looks like this: 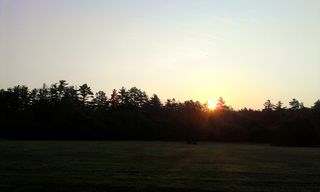 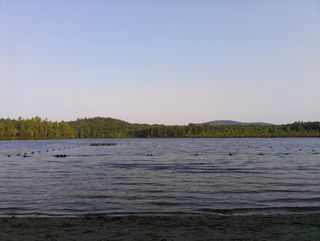 There were drum circles and singing and lots of clapping. I was surrounded by 150 (or so) women and a few men who were all interested in the same sorts of things I am.

There was a table loaded with art supplies and we could use them at anytime, day or night. Speaking of nights, holy crap I was up until at least 11pm EVERY NIGHT and then up again at 7am. That's how I got the sunrise pics and this one: 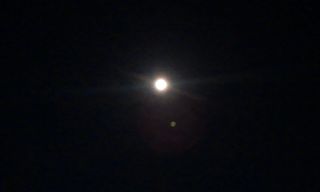 That's the moon and a little bit of lens flare. Cell phone camera and shooting directly into the light…

Anyway, I made a lot of art, stretched  my limits by writing some poetry and in general had an awesome time.

I also learned that if I ever go to "camp" again, to include Gas-X in my bag. The food wasn't bad it was just a huge change from my current largely vegetarian and home grown diet.

I have to write a paper about my experience, 6 pages, in APA style and I have to include references… Holy moly. Loads of work, but I have to tell you, I'm totally excited to be doing it. I feel like I've gotten to the place where I'm meant to be and that is an awesome feeling.