My last post was incomplete. I’d only been able to get books at Target and Staples. This week I went to two of the three the local Walmarts. One had not one composition book and was a wreck. The other Walmart was also a wreck but they had composition books. All are standard size (9.75X7.5 inches or 247x190mm) and college ruled. 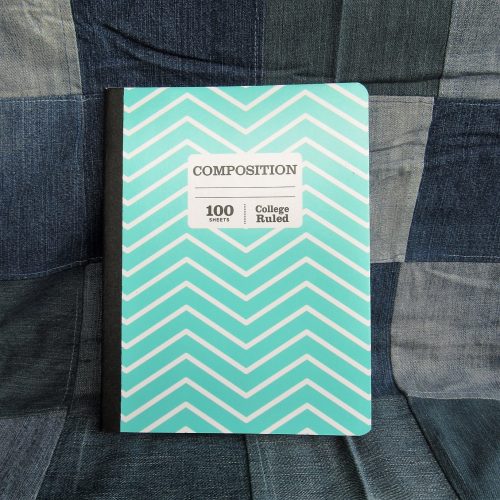 The so called “fashion covers” feature patterns in white and some fashion color. In the case of these there were light teal, salmon pink, and a few other colors. These were also available in awful tacky metallic animal prints. UGH. These were the least offensive of the “fashion” covers. I chose teal and white. 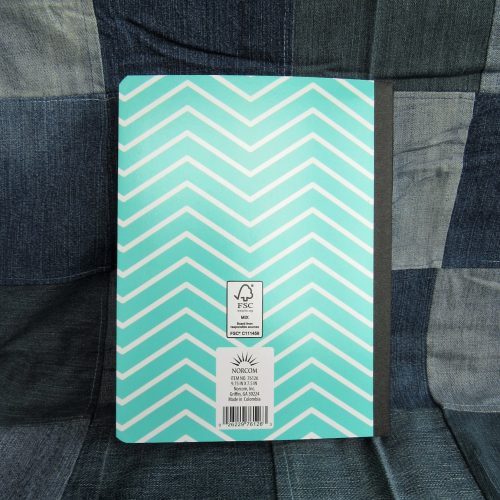 The cover is printed onto thin cardstock. It is not quite as floppy as a poly cover but almost. The card is sturdy enough that the notebook might survive a semester in a backpack but I doubt a whole school year. There is a rather thin strip of textured paper tape on the spine. The width of the tape is proportionally off. It looks wrong. The front cover has a label area, which I greatly appreciate. It is pretty generic looking. Good job on that Norcom, you nailed what a comp book label SHOULD look like. 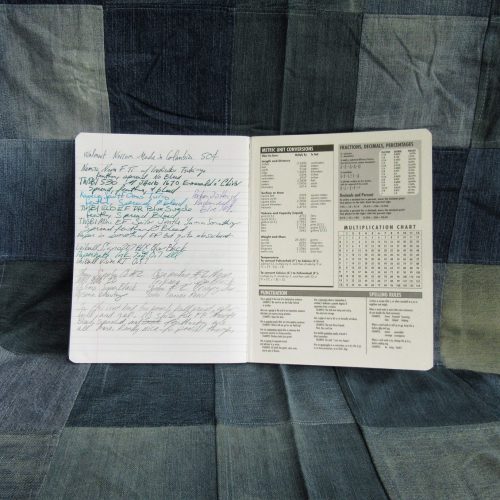 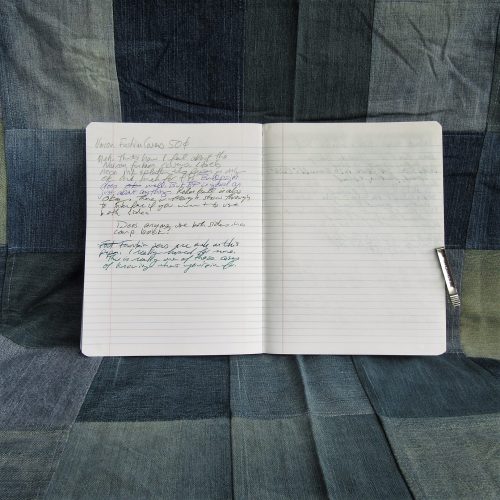 Inside the 100 sheets have light blue ruling that disappears quite well. The paper is nicely smooth but has enough tooth to be great for pencil. Ballpoint, rollerball, and gel ink all did great too. Fountain pens feel great on the page but spread and feathered all over. Even fine nibs bled through. If this didn’t do so well with pencil I’d say avoid it at all cost. 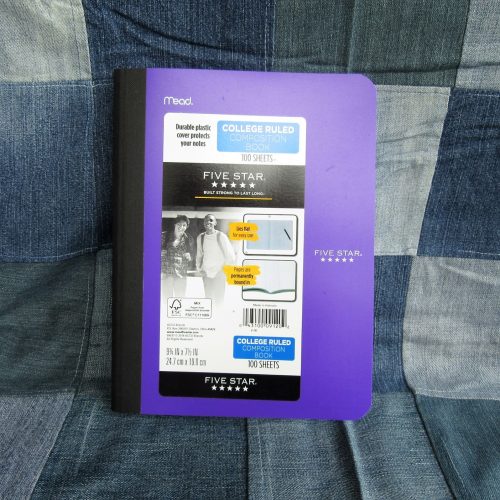 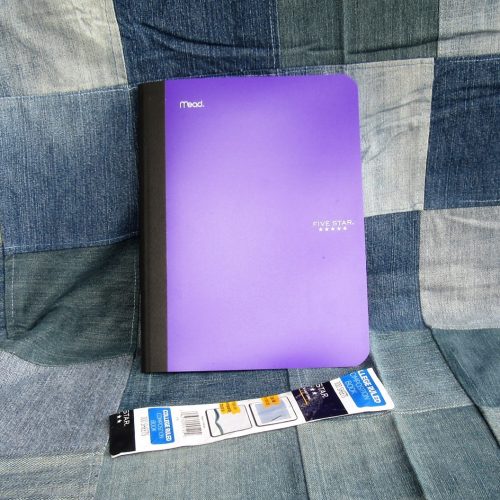 Why try another Mead 5Star when the one from Target was good? Well first this one is $1.97 and the copyright date is different. The Target version is 2016 while Walmart’s was 3013. Does it matter? Yeah. 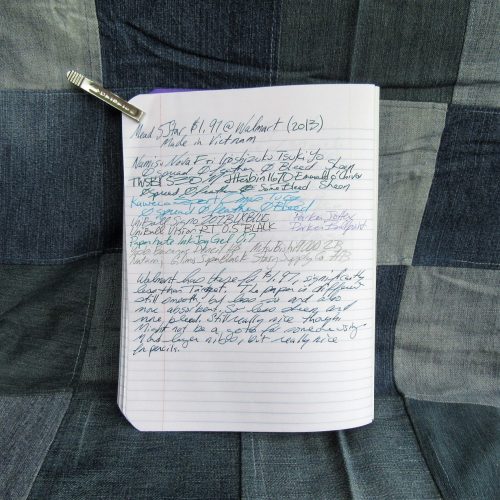 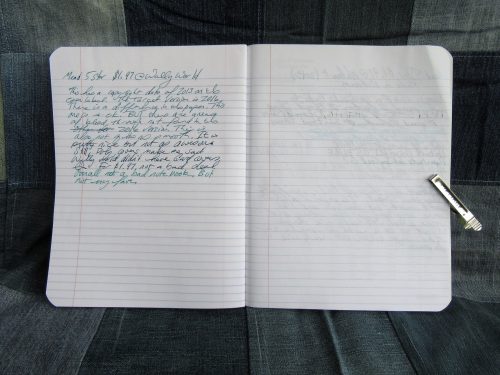 The cover is the same as in the last entry. Thicker and stiffer than most of the other poly covers in the race. The stitching is well done. Repeat the last entry.

Until you get to the paper. It is slightly more absorbent and you don’t get the super sheen with fountain pens. I also had some bleed through that I didn’t have with the Target 5Star. The price is better but you’ll have to dig through the boxes to find some from 2016. I checked but found none, all at this Walmart were from 2013. They were great for pencil and the rest of the pens. Well, except for the firehouse of a Papermate InkJoy I tested. That had issues with bleed through where the letters crossed themselves. 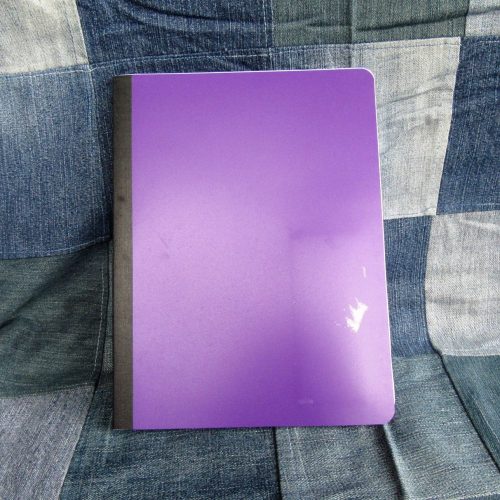 This is the first Pen+Gear* product that I can tell you to avoid. Get their made in India pencils and index cards but avoid this composition notebook at all cost.

Why? Let’s start with the cover. Yes it is poly, the thinnest floppiest poly I’ve yet to pick up. The textured fabric tape on the spine is far too narrow completely throwing off the look of the book. Normally I’d be super pleased that they actually used real fabric tape instead of textured paper, but not when a wider application of paper tape would look right but also do the job of protecting the area where the spine will flex properly. Further the spine is poorly stitched. It is not centered on the spine but folded oddly. The top half of the notebook has wider pages than the second half.

Inside there is an odd 80 count of sheets with bright blue ruling. It’s bright and thick and will never recede into the background. The paper is crisp and holds up well to fine fountain pens. Wider nibs tend to bleed but feel great on the page. Ballpoint, rollerball and gel all do okay. Pencils slip and slide. The paper lacks tooth. I had to really work hard to get graphite onto this paper. 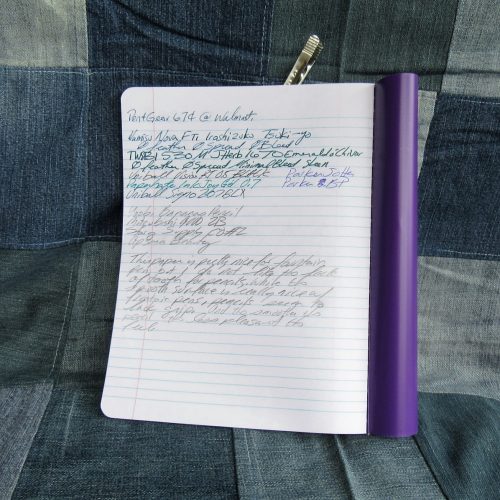 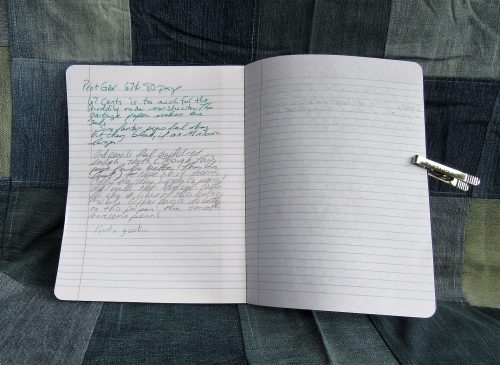 The label doesn’t peel off easily. It left a sticky mess.

I really disliked the Pen+Gear offering. It’s not good enough with fountain pens to justify buying for that purpose and it is just so terrible with pencil that it goes into my do not buy list. 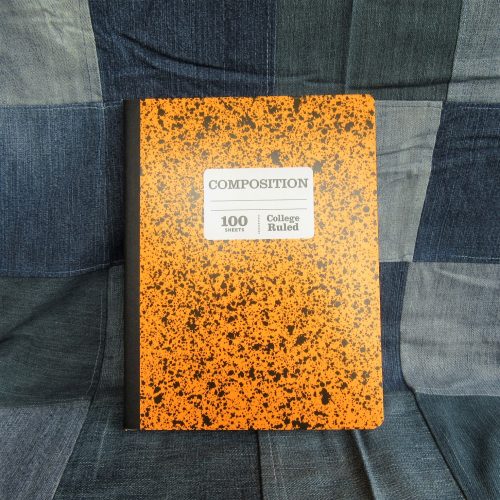 The paper in this is essentially the same as the previous Norcom offering. The cover, other than a different “fashion print” this one straight outta 1988 with neon ink splattering, is the same as well. It sports the same too narrow textured paper tape and thin card cover. 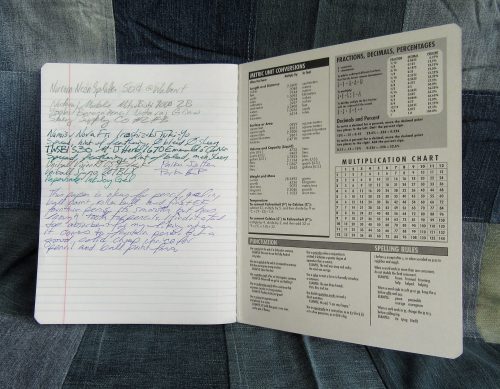 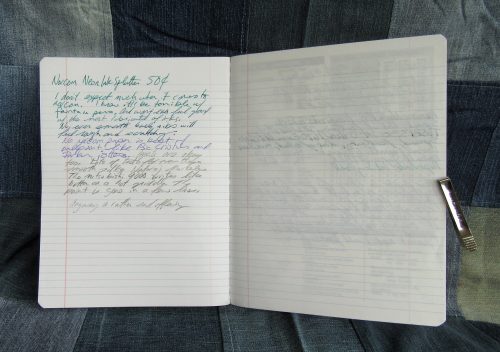 Norcom has another meh offering. It’s not bad at 50 cents- especially for fine or ef fountain pens, and pencil. 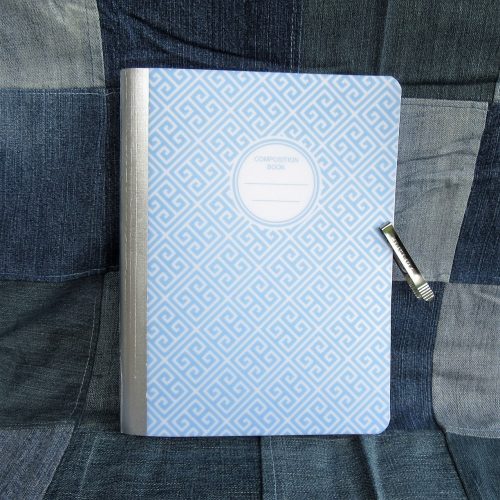 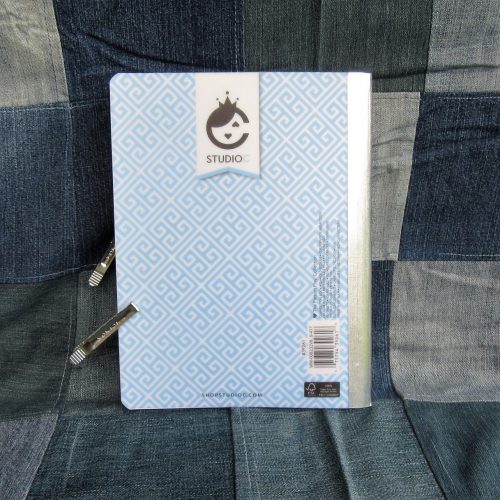 This entry sports a poly cover printed with a variety of patterns in a variety of colors. I picked out dusty blue in squared swirls. The classic front cover label is circular. The poly cover is as thick as the Mead 5Star cover but lacks the interior printing. The spine is taped with metallic textured paper tape. The width of the tape is generous and looks appropriate on the cover. The poly cover is translucent and to protect your work inside, they have placed a plain sheet of white paper with the traditional school info printed on the inside. It is a nice touch. 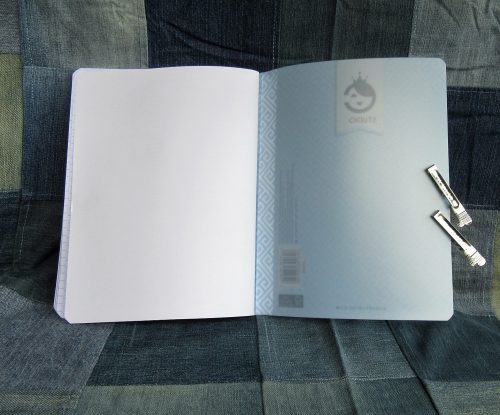 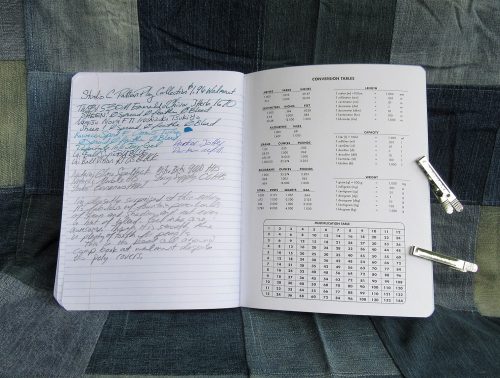 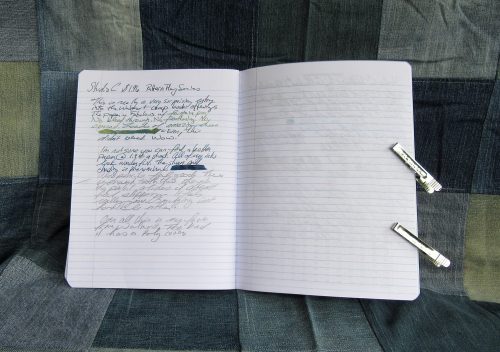 The ruling is bright blue and disappears behind most of the sample writing I did.The paper doesn’t feel particularly smooth, until you run a fountain pen across its surface. Then the pen dances and slides in the most wonderful way. Even better, there was no spreading, no feathering, no bleed through and loads and loads of wonderful sheen. This notebook performed as well as the Mead card covered from Target. My inks all look amazing on it. Also, pencil feels wonderful. There is enough tooth that the pencil slides perfectly and looks nicely dark. I didn’t have to work to get the graphite on the page. 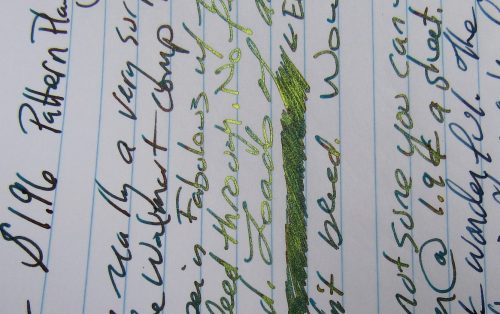 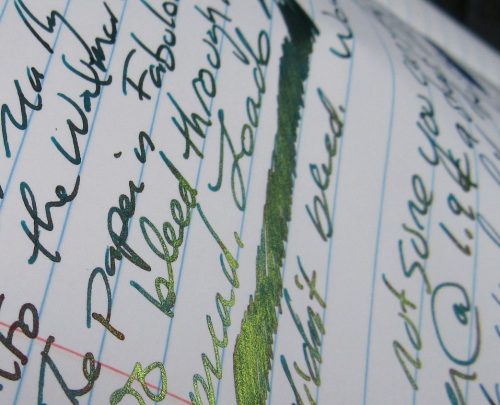 The Studio C was a very pleasant surprise given how disappointing I was with the rest of the Walmart offerings. It’s not the greatest value, at 1.9 cents per sheet it’s in the middle of the road of expense. The Target Mead card covered is still a better value at about 1.2 cents a sheet. But the price difference is negligible when you compare the 100 to 70 sheet offered in each notebook.

If you don’t write with fountain pens and you stay in the realm of gel, ballpoint, rollerball, and pencil the Norcom have fun covers, and some ugly stuff too. At 50 cents a notebook it is a good value.

I have to say, avoid the Pen+Gear notebook at all cost. The paper is terrible, binding shoddy, and poly cover flimsy and floppy. It is garbage.