If you’ve been following this blog for any period of time, you’ll know about my love and hate of collage. I love a lot about collage but I’ll also tell you how much I hate collage. One of my favorite artists from Dada worked primarily in collage (Hannah Hoch.) I don’t know that I’ve ever discussed this on the blog before, but the first piece that I ever got into a show was a small intimate… collage. The collage was met with success and reviewed extremely well.

That year the collage was selected for the show I had also worked in larger scale and smaller scale Matisse and Eric Carle style collages- but instead of the time honored gouache I made my collage sheets out of… Crayon. 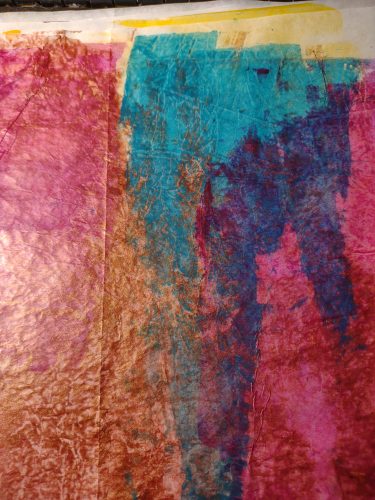 I will eventually write a post about how crayons are magic.

Anyway those crayon pieces, now quite sadly lost and a few gifted to friends and former partners, were as magic as the crayons. A few of the larger scale pieces were responses to popular (and less popular) music of the era. And because I am a walking stereotype, more than a few were responses to Ani Difranco. I have no doubt that those collages haave also fallen apart. Wax is notoriously resistant to glue. All it would take would be a few atmospheric changes for the pieces to peel away from one another. 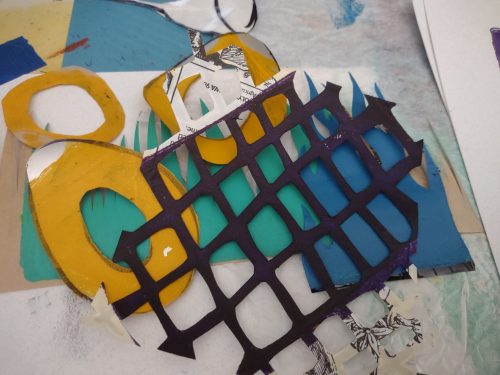 I think the magic crayon collages also showed the power of the arts for healing and processing. I was using the process of making big sheets of my own collage papers- scribbling and making the pages evenly colored, then responding to my own life and music. It’s a great process. 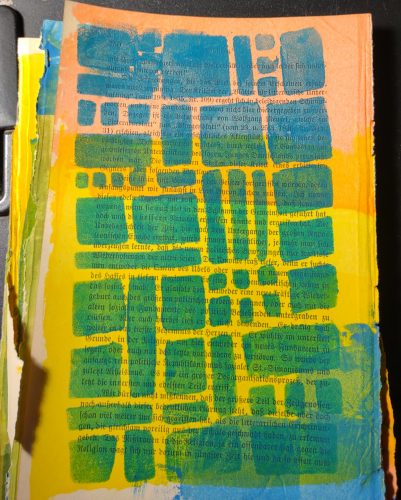 Anyway. I resented the hell out of that piece that was in the show. It was my first foray into collage- torn up magazine pages to create a sea of blue and then carefully clipped images from a magazine to create a surrealist image of confusion. It was good but it wasn’t practiced or even evolved. I hated that my first try (sort of I did dozens of these little collages) was selected, when what I wanted was my more practiced and mature art selected.

I had already turned from what I thought of as immature magazine collages and toward a more refined and matured collage style, and instead of being recognized for my hard work, my first foray was being applauded. I had selected my own pieces to apply to the show, we were allowed only so many, and I had put in my maximum allowed, and only that one* was selected. I also didn’t have the cash to frame the larger pieces. Even 25 years ago my money was tight and buying large poster sized frames for large work was beyond my budget. They didn’t allow for you to submit unframed work and then frame them IF they got in. Small frames I could build, large frames I could not.

*My memory is telling me that there were 2 and it was a pair of collages selected BUT I cannot for the life of me remember the second image. I can recall the pair on the wall, but only see on in my memory.

Posts like this are supported by my Ko-Fi supporters. Like what you’ve read? There more like this over on Ko-fi. I write twice a week there about art and creativity for my supporters. HEad on over ( tap that ko-fi link on the right sidebar or this link right here.)