Uniball introduced these white Apple-esque pens last year. The exterior of the pen looks nice, if you like white and for your stuff to look filthy as soon as you touch it. The white matte plastic feels pretty nice. The slightly rubberized grip is comfortable to hold. It’s slightly narrower than other pens in the same price bracket. But I’d also say it’s leaps and bounds better than their other capless pen with an extended rubberized grip, the Signo DX, which at some point I declared the fugliest pen in existence. This is better- there is something about the tip of the pen having a bit of a seam and not being rubberized that saves it from fugly fate. 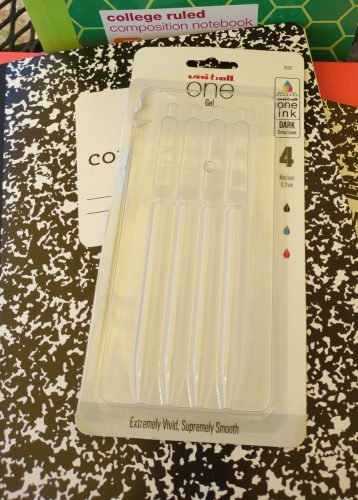 I also like the wire clip. It doesn’t feel like it would hold onto much of anything well, but it stays put, especially to the neck of my shirts. It’s not tight but it’s decent. I wouldn’t go jogging and expect it to be there when I finished, but for normal day-to-day workplace stuff, it’s okay. 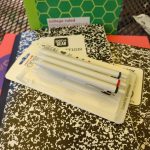 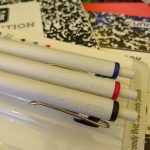 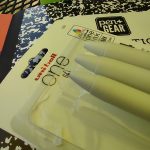 Inside, Uni has developed a “new ink” technology. It’s a gel ink that sits on top of the paper a bit more and the pigments stay suspended on the surface, for a more vibrant look. Does it look more vibrant to me? I don’t know. I honestly can’t tell the difference between this and other Uniball pens. I can say that the black ink (I also purchased a red and blue pen) is nicely black as all Uni black pens are. The ink is somewhat water resistant, maybe waterproof once the unbonded ink moves around. The ink that does lift, isn’t much and it is a cool neutral gray shade. Doubt it would foul all but the lightest shades of yellow watercolors. The .7 medium tip feels and writes more like a fine to me, especially when compared with other .7 tips. 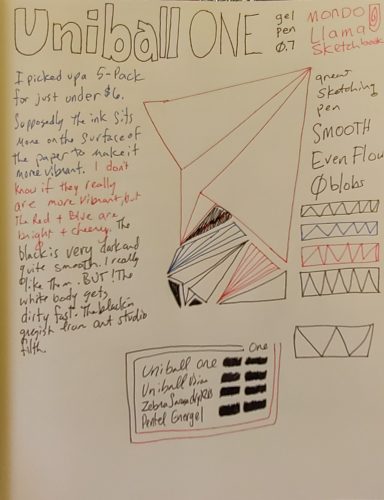 I took quite a few meeting notes with this pen on the Talens Art Creation Sketchbook (review forthcoming) and it didn’t skip or blob. It feels smooth as butter on that paper and all the Composition book reviews I’ve done this year. nThere were a few instances of a line being “hollow.” Byt htis I mean the point seemed to not get ink on it and only the edges of the ball, odd. This only seemed to happen when I applied a lot of pressure tov the pen as I wrote. Honestly I like this pen quite a bit. But the white barrel is a deal killer for me. I have grease, paint, chalk, charcoal, or other art materials on my hands all the time, and in the 2 days I’ve had this pen for testing, it’s now grayish. It’s pretty but just not practical for me. 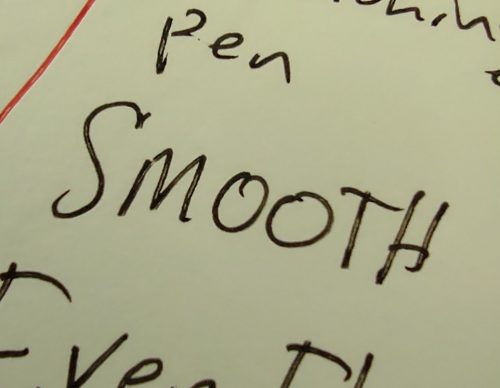 I bought my pack at Walmart during back to school sale for $5.78. Singles sell online for $2.20 so a 5-pack for under $6 is a good deal. I like them but I don’t know that I’d buy more, just because of the white barrel.

If you like this post consider sending a me a coffee via Ko-fi, a service that lets you show appreciation for my reviews! Head on over and check it out, supporting me means you get supporter only posts!