I have resisted the allure of the Camel HB pencils for quite some time. I told myself, “they won’t be great, they are pretty but they aren’t great.” Finally in  my last CWPE order I broke down and order 4 of them. At $1.50 each they aren’t cheap but they aren’t Caran d’Ache Stinkwood prices either. 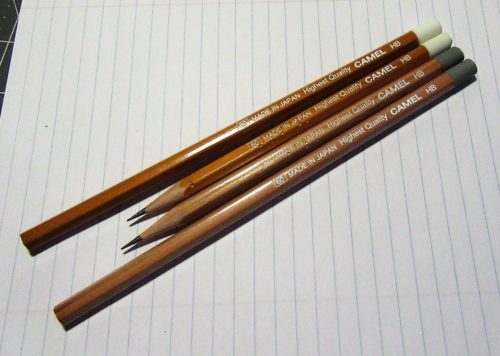 I resisted them because I’m in complete and utter lust with their minimalist design. The sleek lacquered finish, with a clean white imprint, and a ferrule-free eraser is simple pencil perfection. They are available in 2 color combinations (plus some pastel shades)- cedar with clear lacquer and a grey eraser cap and cedar with a warm honey stain and lacquer, with a off white eraser cap. Stunning. I really love how these look. 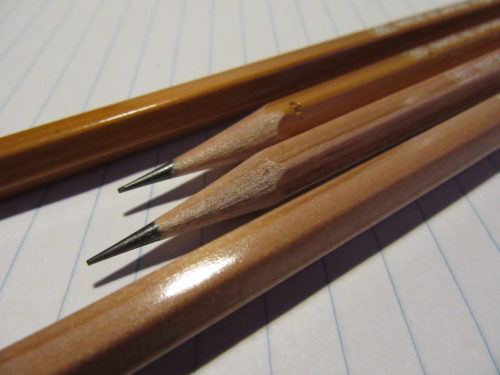 I sharpened one of each of the colorways and told myself they were going to suck, this despite the glowing reviews they’ve received just about everywhere. I’ve used them for page after page in my most recent novel in a Yoobi Composition notebook (more on those at a later date.) I’m getting 3 to 4 pages per sharpening in the Carl A5 and the same with the KUM masterpiece. Other than point retention/durability the feel of the core is smooth on all the papers I’ve tested it on. It performs well on Yoobi comp, Tomoe River, Moleskine, and various Field Notes. I like these pencils a lot. I’m bummed I only bought 4 of them. I should have bought 10, or a dozen, but more than the mere 4 I have in my grubby paws. 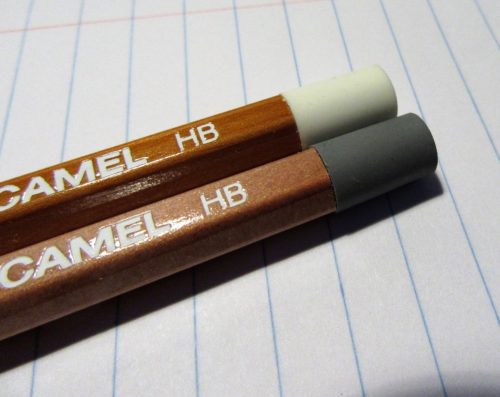 The eraser works admirably well, though I am loath to use it lest I grubby up the clean lines of these pencils. I purposefully pulled one off to see how it worked and the pencil itself is whittled down to fit inside the eraser just like a regular pencil cap. A dab of superglue reacquainted the two pieces and now even when I try I cannot remove the eraser. 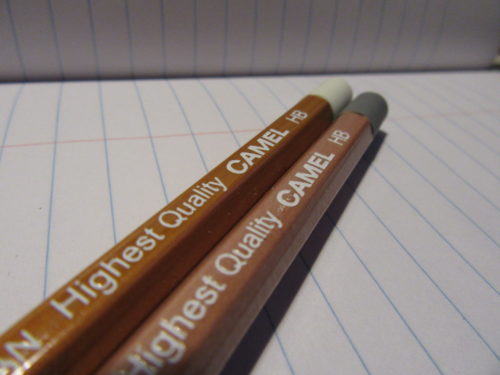 The bottom line on these pencils, is that they have a beautiful clean design, crisp printing, a thick coating of clear lacquer, and that ferrule free eraser cap is a stunner. Overall the minimalist design of these pencils makes me super happy. The fact that they perform well means I can keep using them over and over again.

All my stationery nerd friends said, “Read this book, you’ll love it.” Well, I have and I don’t.

When I spot a factual error in a book it makes me question all other information held as facts in the book. The first factual error I found was on page 26 where Ward states that reed pens are “filled by pouring ink into the top of the pen.” Apparently Ward has never used a reed pen because this is  hilariously wrong. Reed pens are dip pens. You soak some reed pens (bamboo) in water before use to activate the capillaries in the bamboo, but even still they are still dip pens. They function similarly to quill and steel dip nibs.. You dip them in ink. After this point I was left wondering what else was wrong.

In the section about Moleskines he writes that the “first” time a moleskine was labeled as “Made in China” was only after the company had been purchased by SGCapital in 2013. I suspect this may be a typo and he meant 2003, which was certainly before Modo e Modo was purchased. Further I remember the online uproar the “Made in China” label created. I remember my first “Made in China” Moleskine. I got that Moleskine long before 2013. In fact 2013 is long after I’d given up using Moleskines due to quality control issues. It is true that the Moley had always been made in China, and had previously been labeled, “Designed in Italy.” Further I have some issues with his “historical” facts of small-m moleskines. Yes there was one Parisian supplier that sold those made by someone Chatwin loved, but moleskines are a style of small pocketable notebooks- not just the one sold in that one shop. Rather, moleskine was used to describe all manner of small pocketable notebooks covered in oil cloth and were available all over Europe.

After this point I began to hate read the book. The section on pencils is quite good, though I’m reticent to take anything he’s written as factual given the previous factual errors. The section on King’s The Dark Half may not be totally accurate.

Ward’s humor is not funny to me. He tries really hard to be pithy and funny but often his jokes fall flat. Where Rees has deadpan down pat Ward’s attempt at humor fall flat and scratching my head, wondering how did he think that was funny? I got what he was trying to say, I just never found the humor in what he had written. Frankly, Ward’s writing style bores me. I’ve read many of the books on his reference list, and while those are boring they are far more informative than Ward’s book and because the writing was solid, well researched and informative with out wannabe pithy commentary, they were good.

I’m sorry, but The Perfection of the Paper Clip is anything but perfect, and I can’t even say it’s good. I’m not including an Amazon link for this one. just because I tortured myself doesn’t mean you should too.