Here’s a pic of what the top of the paper cutter looks like with the wooden block in the middle: 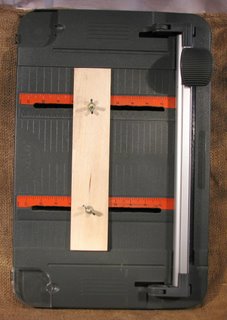 This is a pic of the underside in case you were wondering where to make the cuts. I think I need to add a lock washer between the bolt and the washer- to eliminate the spin when I tighten the wingnuts. 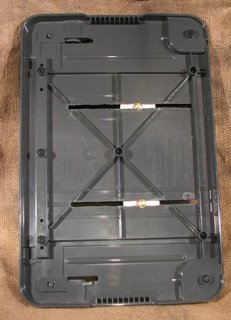 Here’s the top with the bloc all the way to the left. I had thought that making the cuts would weaken the top a lot, making it unstable and thus making cuts that were crooked. What I hadn’t thought of as that the wooden block could act as a stabilizer when the nuts were tightened. I will say that when the block is loose or not in place there is a huge amount of flex in the top. 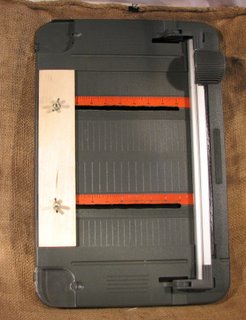 And here is a close up of the underside. It shows what a crappy tool the dremel was for this job, it melted the plastic far too easily to be of any use. It also shows how far back I had to trim the supports so that the washer would pass. 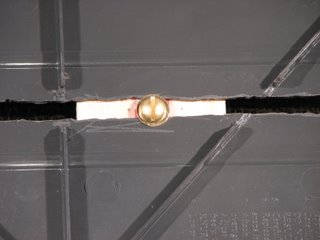 SOme notes about this project: Next time I would chose a screw with a smaller diameter, this would decrease the slot in the top, the cutting time and overall make this an easer task. I would also get a shorter screw- a 1inch would have been more than enough. A small carriage bolt without threads for the first 1/4 inch would have been a good idea as well. Anywhere with unevenness allows for the threads to get caught and makes smooth travel difficult. I would also bore the holes in the wood block larger, allowing the bolts a little travel, i think it would make adjustments easier. I would get proper tools for the job. The dremel sucked at this but then, perhaps using a different bit would have been better. If I used a narrower bolt I would have been able to use my saw and cut a single cut. But then anything would have been easier than drilling 60 or so holes and then trimming out the remains with wire nips.

All the moaning and groaning aside, this came out pretty sweet if rough looking. It works well and i think that with a few ore modifications it will be damn near perfect for my uses, and if I get another paper trimmer I’ll be doing a similar mod.