One of my coworkers has been promoted; he’s headed off to work with a subsidiary of the company I work for as a traveling coffee guru. I’m unbelievably excited for him. The job entails a great deal of travel in the North East as well as out to Colorado where the subsidiary has its head quarters. How cool is that?

As a farewell and good luck gift to him I’m making him a set of Coffee Jotters made of the packaging of the company employing him. I’ve enlisted the help of several people working in his current department. When they brew coffee for sample they are saving the packaging for me. We’ll see how many packages I get from the weekend but I was able to snag one on Friday and I bought anew package of coffee and made that into a jotter.

These jotters are cool in that I added pockets to the front of each one. One I simply folded the packaging over and stitched it in place before I made the jotter and the other I trimmed the packaging to size and used a piece of the cuttings to make the other pocket. I think they came out really well.

I also did a little experimenting on the mylar. I remembered from high school art class that mylar will tack to itself at a fairly low temperature. One of the packages had a lot of seems that I didn’t want and were too small to trim off the package it would have fallen apart. So I hit it with the iron at a very low temperature, and while it didn’t tack down all the folds and creases in the mylar and plastic disappeared. I didn’t get the results I was looking for I certainly got results that were in the end quite useful. (Cautionary note: When I say low heat, I mean as LOW as my iron would go.) Oh so in the end I ended up simply zigzag stitching over the offending seams. I like the look.

So here are a few pictures of the Coffee Jotters. 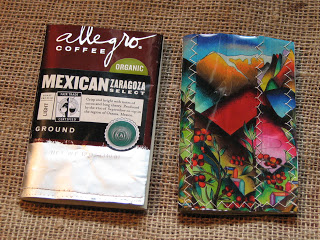 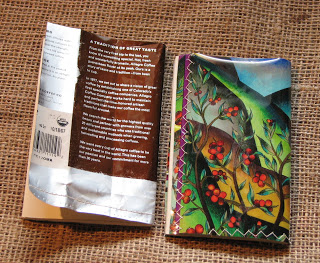 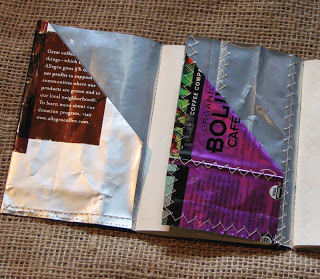 I see now I forgot to remove a logo, but we’ll all have to deal with it.