well folks I have been drearily under the weather today. It's been abysmal. I think I've only been awake for a few hours here and there. I wake up, sip some tea or ginger ale and then fall asleep again. I'm feeling slightly coherent for the first time in well, all day.

Would you believe it's taken me most of the day just to get the paragraph above from my head to the computer? Man I'm beat.

In art journaling news: The Ning site is up and it's starting to get really neat. If you are interested in art journaling or journaling in general head over to the group, join and check it out. There are a few free workshops up already. I'm well into working on 2 paid workshops on 2 types of bookbinding as well as making recycled scrap covers for lots of book projects. It's going to be SUPER awesome. There are no other words to describe it but super awesome. Jonathan Manning (AKA @artisticbiker) has set up a really great tutorial on making marbled like paper with spray paint and man is it ever cool. I can't wait to use it as a book cover!  There is now a forum to discuss prompts, stenciling techniques, and a lively discussion about art book vs art journaling.

I'm excited, can you tell?

The other thing I'm excited about are podcasts. (I know how 2007 of me) Ricë Freeman-Zachary has been putting together some of the most wonderful podcasts. She is interviewing some wonderful artists and many of them art journalers! (Squee) She just put one up with Kelly Kilmer and it's divine. You can find it here, but you can also download it off iTunes for free. I just downloaded the entire library of Ricë's podcasts to keep me company during my hellish commute. Additionally if you find her on iTunes you'll find a whole host of other creative types with some good stuff too! (you'll also find an artist I love but whose voice grates on me like nails on a chalk board)

I've not been art journaling as much because I've been fighting off this cold for about 3 days, but I shot a few pics of stuff I had been working on and I made some wrapping paper last night. Every year I make my wrapping paper out of recycled materials. I scrounge kraft paper and newsprint out of boxes at work, flatten it and bring it home. Normally I sit infront of the TV with my sharpies and a few stencils and doodle out a few sheets here and there. We gave up cable this summer and my LCD tv is about to become my monitor (not totally kiding as it's been sitting, unused for close to 3 or 4 months now) I needed some paper fast for my secret santa gift for work. So I banged out a 2 part stencil. First layer-  rays radiating out from the center of a star. Second a big star. I used silver spray paint for the rays. Then I put the star over the center of the rays and hit it with a layer of red, then a spot of silver, then a spatter of red again. I wasn't too perfect about anything as I wanted to let the silver over spray a bit. I call it my bad ass wrapping paper. Perfect for men, women, kids and totally cool, even hipsters drunk on PBR will like it and want to wrap their thrifted gifts with it's awesomeness. 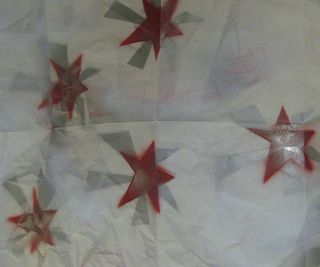 The pic isn't that great, I took it in a dark room, so you'll just have to trust me on it's total awesomeness.

Another thing that I've been experimenting with, something I havne't done in, well ages, since high school is adding photos to my journal. I usually avoid it because I want to avoid the look of, well, a scrap book. Yeah, I said it. I'm no scrapbooker. I don't want people to think that my art journals are scrapbooks with paint. (hangs head) I like scrap books when other people make them, but they aren't MY thing. Does that make sense? Anyway I got this Pogo for a Christmas gift and I'm in love. It's so freaking awesome I'm taking pictures of the dog, the couch, my morning commute (break lights all the way) I'm printing pictures like crazy and I'm loving it. OMG the pogo is the shit. 2×3, business card size, you could attache these thing to anything with the peel and stick stuff on them, ATC, journals, scrap books, The possibilities are endless. So I had to do it.

I did a self portrait when I got to Maine after an interesting and mostly uneventful drive. Then I STUCK it in my travel journal. Yup. It's there. I added a drawing and some gesso and here it is: 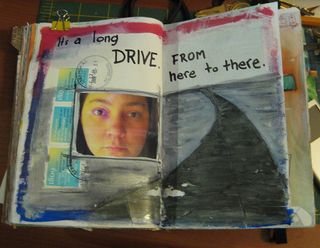 And you know what? I love it and it doesn't look like a scrapbook at all to me.

So this part of the post is a reactionary tale don't go further if you aren't in the mood for a good old fashioned rant.

There's been a rash of blog posts and tweets about the group Knitta, Please. (go here and here for some of those posts.) I've been mulling over the posts and thinking about them. When I first saw KP I thought the name was offensively tongue in cheek. I wasn't overtly offended. Perhaps because I'm white, from the sticks and don't knit. I brought it up to my partner (She's Asian and grew up in the western part of Mass) and she rolled her eyes and found it offense and, frankly, ignorant. I then pointed out to her the T&Asia soaps. That garnered another eye roll. I then had her look at the packaging and that got another eye roll, with the exclamation, "Ignorant." I admit I had a chuckle at both these things at first but I also recognized their offensiveness. It's rather blatant and in your face.

But who am I to comment on racism? I'm a white* working (just scraping by) class lesbian in a relationship with a Korean American adoptee. I can tell you about hate, intolerance, fear and discrimination based on my relationship. I have been called names, treated poorly and, yes, ignorantly because in the past I did not pass for straight. I've been called Sir more times than I care to remember. (Seriously do I need to tell you about the "girls" they are hard to miss and my shoulder length hair?) I've been asked many times if the "stories" about Asian women are true and if I have a fetish. Some of these questions are okay, in conversations with my friends I don't mind this line of questioning but if I've just met someone then it's probably not okay. I have a few standby answers for these questions: "What stories?" and "Only for one." I imagine this is the same sad tired old story for anyone in an interracial relationship.

While much of the crafting world does not live in a place where racism and hate are an everyday occurrence we can't stick our heads in the sand and pretend it doesn't happen. It's a daily occurrence. I've seen it happen to my coworkers. The worst offenders are not the working class people either, it's the rich white Americans who don't talk to people with accents, or see people of color on a regular basis. Racism, hate and intolerance aren't dead in America and it's roots are still firmly in the middle and upper class. The good ole' US of A is not in a place yet where terms of hate can be co-opted by the very people who used those terms for hate in the first place. It's just not cool.

*if we break it down I'm not 100% white either, in my family history there is some Micmac, I'm about 1/16th not enough to get into that basket making class I wanted to take. The rest is all European; german, swiss, irish, scottish. Mainly I identify my heritage as German and Swiss.