Subtitled: How much does collaring impact the writing experience?

Throughout this post I use the term “collared” from the David Rees book How to Sharpen a Pencil. While I find the book… silly, it is the easiest way to describe this effect and likely language than many people into pencils will understand.*

About a month ago I picked up a package of Tennessee Red pencils, quite a while after reading some folx harping on the off centered cores, and after I read a couple of the reviews on the Musgrave website I really wondered how much does the off center core impact the writing experience? Certainly we can all agree that aesthetically an off center core is unattractive, but does it really impact writing? 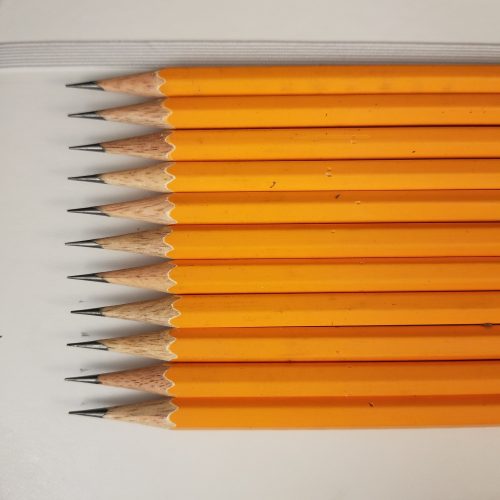 I’ve ordered and used many pencils from Hindustan from Marbled to Metallic to Trikones and they have some of the worst centering of any pencils I’ve ever laid eyes on. But truthfully, I cannot point to a time when a minorly off center core impacted my writing. Even some largely off center cores haven’t impacted my use of a pencil. The only time I’ve had a core impact my writing was a particularly egregious Dixon No.2 where the core was roughly 1mm from one side of the pencil. 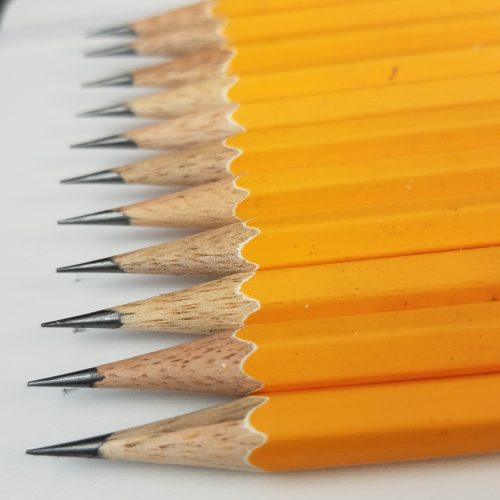 My hypothesis is that minorly off center cores will not impact the writing experience. That only grotesquely offset cores will impact writing. That collaring while ugly, is less of an issue for use and is largely an aesthetic issue. 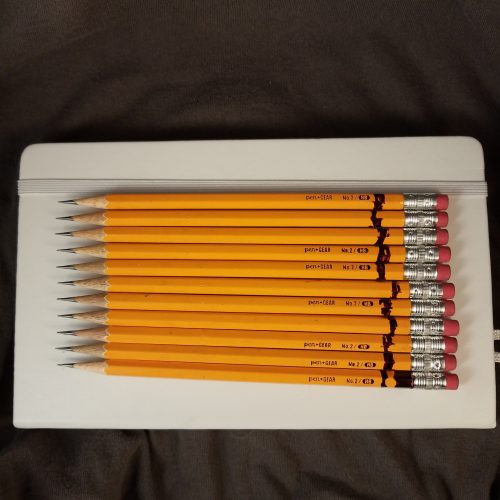 The experiment went as follows: I purchased 96 Pen+Gear pencils at Walmart. These were purchased with the understanding that they generally have many off center cores and I’d be able to pick a handful of terribly off center cores and some that were perfect and compare them visually. Then I’d use a small handful of them to test them in writing. For writing I would test them with 4 sharpeners: Classroom Friendly, Apsara Long Point Hacked, Dahle 133, and Alvin Brass Bullet.

Annoyingly, these 96 Pen+Gear pencils were the most centered of any Pen+Gear packages I’ve ever purchased! Only 31 of the pencils were off center, with 10 of those being visually really terrible, and not even one egregiously off center. 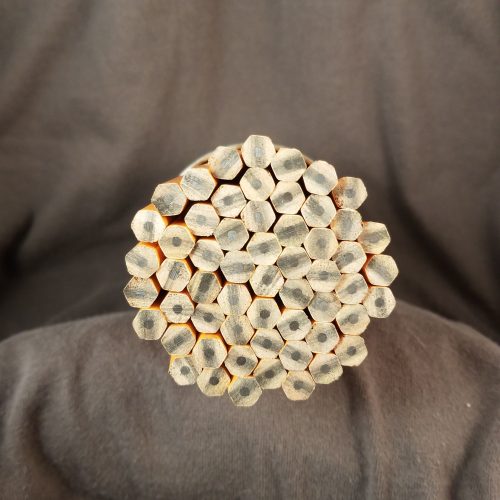 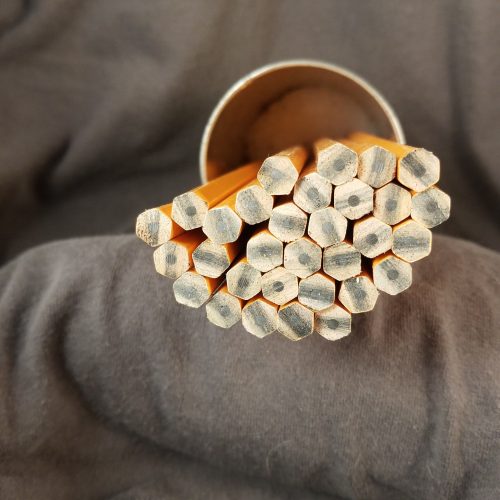 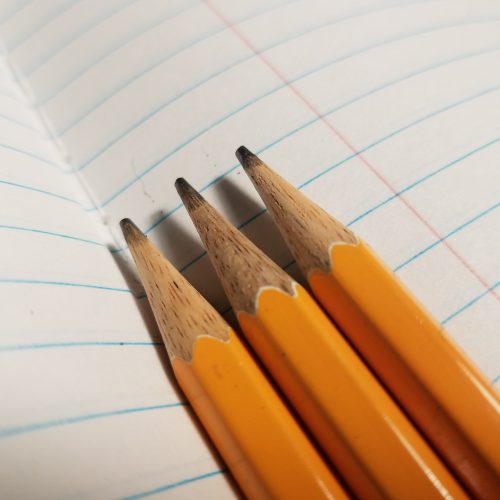 So, yes, the collaring was visually unappealing. No matter how you look at them the collaring looked awful. My expectation was that my writing would be impacted, badly.

I selected the 5 worst of the collared pencils, slid them into a pencil cup and one additional near perfectly centered, nearly uncollared pencil to go into my cup. Each pencil was assigned a number. Measured and recorded. Then I used them to write to the point where I would sharpen. More measurements taken, and recorded. Then finally sharpened with another sharpener. 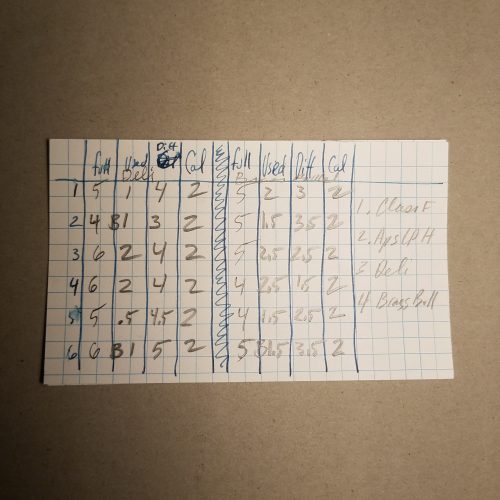 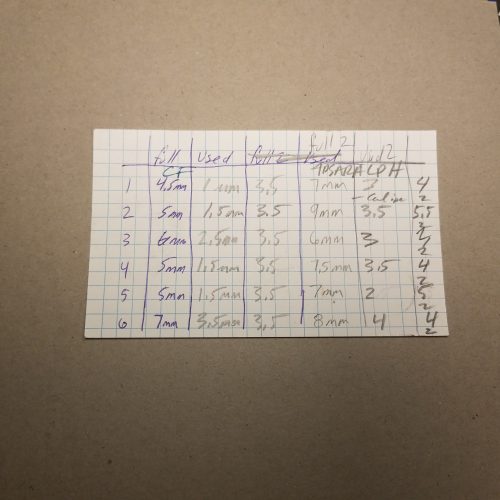 Results were interesting. I reach for a fresh pencil almost precisely when the pencil point  reaches 2mm in diameter, regardless of the sharpener used. After I completed my test I checked this with a Blackwing Diana and found the same thing, occasionally I would push the softer pencil a bit further and go to 2.5mm in diameter. 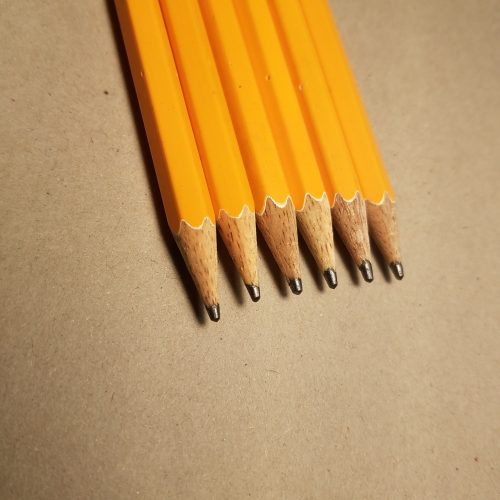 I only came with 1mm of the collar on a rare occasion and with 2 of the pencils, but I stopped use not because of the collar, but because I’d hit the 2mm diameter. I did not have a single instance of stopping use due to collaring. 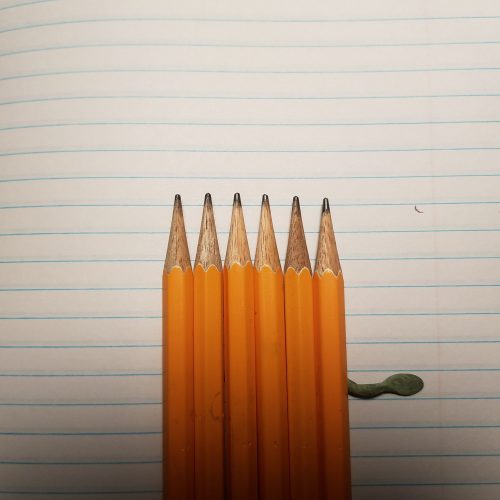 My writing sample size was relatively small, 6 pencils, 5 of which most pencil fans would have called egregiously off center, but in the end had no impact on their use. I could pull the rest of the 31 terribly off center pencils and use them, but I have no doubt that there would be little change in my results. In my use of several hundred pencils I have only had one or two where the centering and collaring impacted my use.

So, if you have some “horribly” off center Tennessee Reds, feel free to send them my way, I’ll use them up.

*For reference I do not find the book helpful or humorous.