The DayJob studio is now fully functional and all that remains is all the weird little stuff that happens in any studio that holds classes on a daily basis. There will always be consolidating inks and paints, and cataloguing papers and the archive.

I’m not going to lie here, I’m incredibly proud of the work I did with my new friend and letterpress mentor, Mitchel. Together we did an incredible amount of work over the course of a few weeks and made the print shop something that functions for classes.

It has also lit my creative fires.

My imagination for trash printmaking has really taken off. I’ve been sketching and cutting and gluing many plates. I suspect that many will never get printed, either I’m not happy with the image, or the idea just doesn’t work. But you never know until you test it out. With trash printmaking, there isn’t a shortage of printing plates- they only require a bit of work, and there are dozens in nearly every person’s recycling bin. 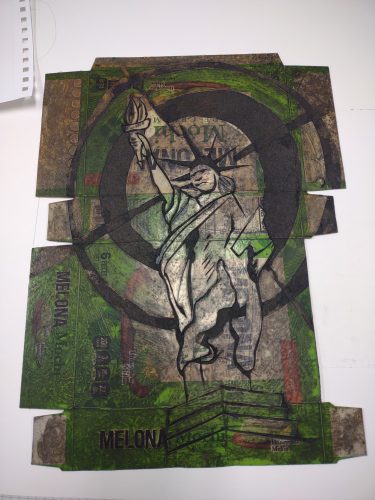 This has freed my brain to create and create some more. I’m not worries about the expense of copper, zinc, or steel. Instead I’m spray gluing a thin carton to another carton and then sketching my idea with a Sharpie. 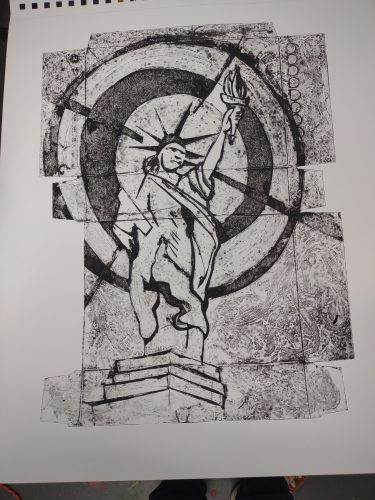 I also had some thoughts about working on No Brand Notebooks again. I was able to pick up some inexpensive blocks to test some ideas on, and I liked the pink carving plates more than I expected. I had learned through work and the guy who ran the print shop before the closure, that you can mount the pink stuff and run it through the Vandercook. Again, mind blowing.

Anyway, I’ve carved up a bit of the pink stuff to make covers. I’m considering what inks I want to print them with and when I figure out color schemes I’ll be printing up a bunch of covers for pocket notebooks again. NBN will be going letterpress, but a bit weirdo style. 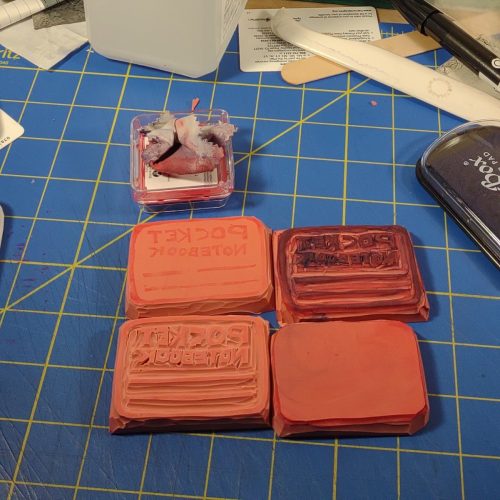 Another thing- sometimes you are given some weird stuff- I signed up for this weird stuff. The shop was gifted these glass circles from a 50s era etching tool. I don’t know how they worked but they are cool as hell. The circles range from 5mm to 80mm, and then they have a range of thicknesses. 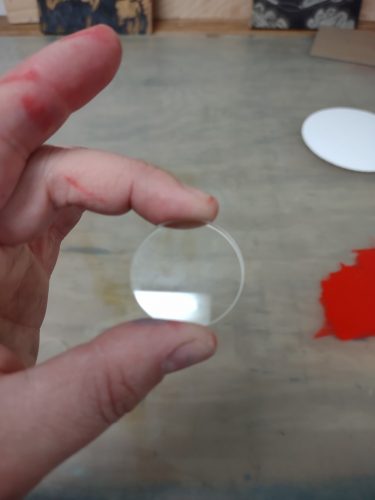 I grabbed a handful of them, in a single thickness-ish, stuck them to a backing, inked and printed them. I struggled a bit with press pressure, linoleum block high was too high, then the height for other blocks was too tight. I ended up crushing the glass on a few of the circles. If i had used a smooth new piece of MDF I don’t think the glass would have cracked. But it did. Anyway, I figured out the pressure and ended up with some fantastic prints. There is just something freeing when you play with weird materials and get something really cool. I’m imagining layering a bit of bright blue over the top of that brilliant red (Charbonnel Cardinal Red). I think the layer of color would be amazing, while the pop of red and blue would be cool. 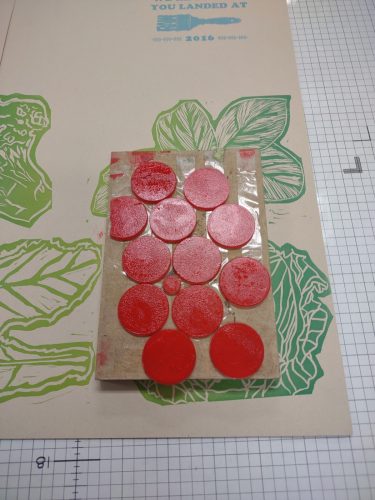 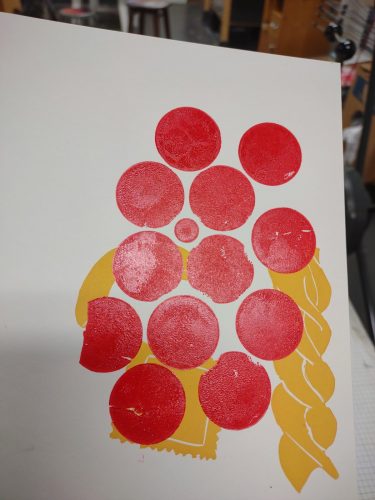 Anyway, get some weird stuff into your studio and just play with it!

This post is made possibly through the generous Ko-Fi support of people who read this blog. I appreciate the support. Supporters (even one-off) get additional content through Ko-Fi, where I post additional behind the scenes information that you can’t get here. Monthly supporters get additional posts and art packs mailed to them on a regular basis. Interested in learning more or buying some original art? Head over to my ko-fi page here!