I’m going to start off this review with a negative statement then run into the more positive. This isn’t my first Kuru Toga and won’t be my last, but you shouldn’t buy this as your introduction to Kuru Toga. Why? It’s a cheap imitation of Kuru Toga greatness. The idea of the Kuru Toga is that the lead rotates so you are always writing with a sharp crisp point. This pencil does that, and does it pretty well. If I were just reviewing the Kuru Toga “engine” this pencil would get a high five and stellar review, unfortunately the great guts are marred by a god awful pencil body. 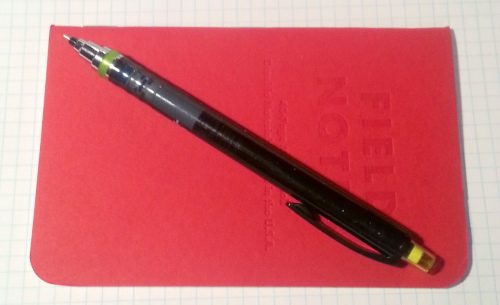 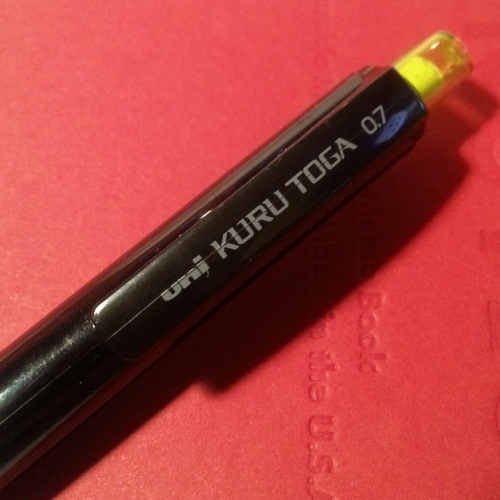 The body of this pencil is smokey gray plastic that allows you to see the inner workings of the pencil. In theory this is a pretty cool idea, but unless you are working in bright light you can’t really see the inner workings. For me to see through the plastic I must be under a nice bright light otherwise I can’t see anything inside moving, certainly not the small white logo on light blue that is inside this pencil. 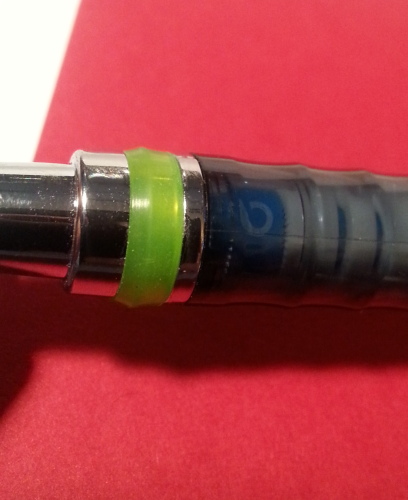 The other Kuru Togas I’ve handled have had a stainless steel tip section, this model has a chrome plated plastic section with a super wide silicone ring around it. The rubbery silicone grip keeps your fingers from sliding off the pencil. The problem is that it’s really hard, has a raised ridge, and is very uncomfortable. I consider myself to have a pretty tough writer’s callous on my right middle finger, but this pencil irritated it. 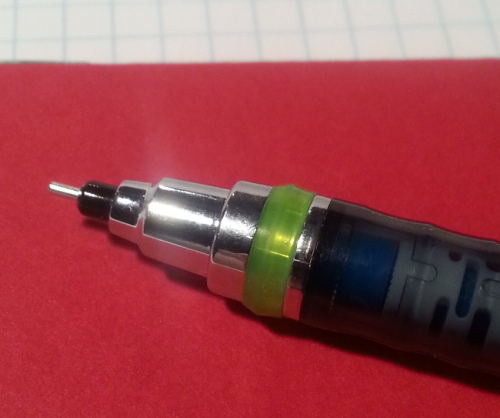 The eraser is puny, but works okay once you can get it into contact with the paper. The eraser is so short that you have to flip the pencil completely upside down for it to make contact with the page, otherwise the body of the pencil gets in the way. When you do flip it over you have to press so hard you deploy the nock.  The end cap is also miniscule and easily lost. Basically, just keep a block eraser on hand for erasing. This starter set arrives with 2 extra erasers, but no case to keep them in, so you’ll lose those too. 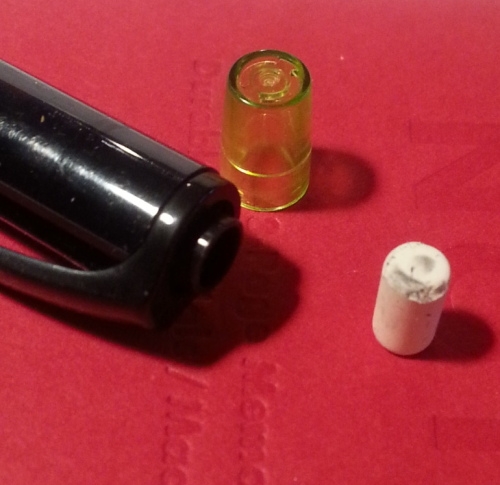 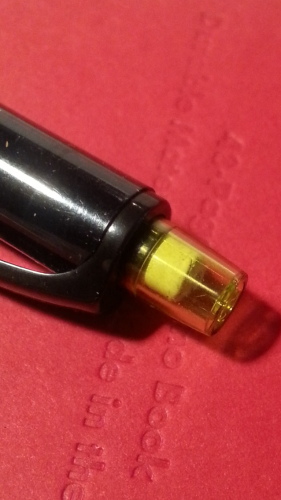 The set arrives with 2 leads in the chamber and a 10-lead tube of NanoDia HB leads. While these are not my favorite leads, they are very nice and smooth for HB leads.  This is probably the best part of this $5 starter set. 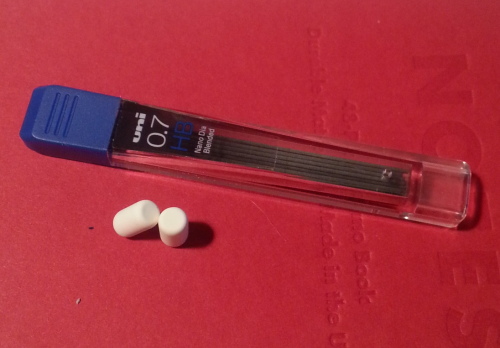 In short I’m saying this pencil is very cheap feeling but the Kuru Toga engine inside works just fine. I wish I had just saved my $5 and put it toward another metal bodied Kuru Toga or a package of BIC disposable mechanical pencils. The “good” thing about it is that I can use it at my internship and not worry about losing it. Since I don’t have desk space of my own, I have to carry all my stuff around either on my person or leave it in my bag, meaning I don’t leave anything of any valuable laying about.

Back in the late 90’s I move back to the area of Maine where I grew up. After 4 years of college I felt stifled by small town life. During that time I started publishing my ‘zine “To Avoid Suffocation” and bought my first desktop computer. It opened a world up that just would not have been accessible to me otherwise. While I was in school a friend introduced me to the bulletin board system and the magicial world of listserv. Oh my.

I started designing fliers for feminist and lesbian groups. The fliers were specifically made to be cheaply reproduced in halftone on a photocopier to look spectacularly shitty. Think punk posters drawn with sharpies and graphic ripped off of websites, manipulated in paint and stuck together in the magic of some forgotten lotus program. They were saved as bitmaps and distributed via the listserv, email, and zines everywhere. I must’ve made a good 50 or so designs and put them all out there under a pseudonym. I have a few hard copies of some of the designs and frankly they are terrible. Horrible stuff, but effective in their messaging. Which, is, I suppose the purpose of all posters.

While visiting my ex at her University I would manage to make a hundred copies of the posters, which at regular letter size fit easily into a regular bag. A spaghetti sauce jar of wheat paste and a cheap brush allowed me to quickly and easily slap all hundred copies up in a short period of time, and dispose of the evidence. I pasted them up alone and without my ex’s knowledge. While I waited for her to get out of class I’d flier bomb the restroom of whatever building she was in, the nearest dormitory, or the library. I wasn’t picky but I had a goal of putting up 100+ fliers each time I visited and I did. I realize now that I single handedly caused thousands of dollars in cleanup* effort, I kept the maintenance men very busy for a semester.

I was never caught. My disguise was that I looked like a student and I routinely was carrying some of my Ex’s books about so the look was complete.

I look back and wonder at my fervor at getting my message across. I suppose it’s the same passion that drives me to maintain this blog, though the messages are vastly different the drive is the same. I’ve got thoughts I need to put onto the screen, for whatever reason I do this and I enjoy it.

I should scan in some of the least offensive and terrible posters and put them up. Though, what is the statute of limitations for damage to public property?**