I
picked up a few laminated signs from old sales at the DayJob. Of
course, I grabbed them out of the trash, well, sort of, they were on top
and clean. These are 1ml thick hot lamination material over card stock.
They are thick.

The
cricut did REALLY REALLY well with them, cut the plastic like it was
butter. I was surprised. The only issue I ran into is that I need the
deepcut housing. Even on 6 and the highest pressure setting I could not
cut all the way through the bottom layer of plastic even though I cut it
on a blade setting of 6, high pressure 4 times. It did score the bottom
layer enough that I was able to sort of pop it out.

So
it’s off to Amazon I go to buy a deep cut housing. Though I’m tempted
to see if I can just sand off the bottom of my current housing…

I’m
going to see if I can snag a bunch of these old signs, I know some of
them are much larger, 14×17! That might be cool to play around with… They also have some in lighter weight plastic… Probably the stuff they call 5mil (actually 1/2 ml thick) would be easily cut on the crapcut. 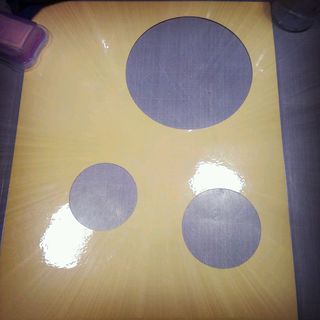 I’ve got too many ideas and not enough time.

Tomorrow I'll show you what i'm doing with these super simple stencils.

Way back in 2009 or even further back I picked up a copy of Make the Cut a fabulous software that let me control my Cricut craft cutter. I was able to cut anything I wanted and items of my own designs. Awesome.

Well that was fun, until Provocraft decided they didn’t want third party software controlling their machines. Then sued the makers of Make the Cut. Make the Cut was tied up in court for years. Googling the company shows several lawsuits. Eventually the software was locked down and the code needed to make the software able to work with the cricut was locked out. If you upgraded your copy of make the cut past MTC 4.1.0 it can’t be hacked to work. You also need to install the pccplugin which you have hopefully saved on a thumb drive somewhere.

Make the Cut is now abandonware. The developer has allowed the site to come and go it is currently up and you can download the software, though there are reports in the forum that the new serial numbers no longer work. The forum and site are up now, I was unable to get any assistance from the owner for getting my reg key. I used their automated system and it did not work. I also have not received an answer via their support ticket system. According to several users on the forum, the user has not responded to anything on the forum for over 5 years at this point (writing this 12/2020).

If you have access to the computer you had Make the Cut installed on you can use these instructions to attempt to retrieve the registration code. I was able to successfully reboot my nearly dead old laptop and pull the code out. Then I emailed it to myself AND saved the MTC4.1.0 installer, pccplugin, and reg code to thumb drive. This will get stored in a safe place and I’ll also back these files up to the cloud. And you should to.

I’ll update my old posts about MTC. Apparently now you need to use Sure Cuts a Lot, but I do not think it can be hacked to work with the crapcut. Again I salute Provocrap with a middle finger salute. We should be able to use the Crapcut with any software in the same manner we use a printer.

Use these links at your own risk:

An no I will NOT send you copies of this stuff. I’ve provided the links, follow them.

Please read the comment section of t his post closely for the information you are looking for. Other readers have posted info.

The info in this post pertains to the ORIGINAL CRAPCUT NOT THE NEW EXPRESSIONS 2. Don’t even ask. It won’t work. Provocrap has blocked ANY outside software from working with the crapcut. Why? Because they suck.

If you bought an expressions 2? Sell your machine on eBay and get one of the machines listed on the MTC website.

Google make the cut 4.1.0 look for a page on TUMBLR. You will need to download MTC 4.1.0 and install it. After that download and run the plugin installer. These are items 1 and 2 on the tumblr page. (No I will not post a link to it, you can work google.)

When you plug it into your computer it WILL NOT CUT IF you don’t have a cart in the machine. For it to cut, plug in a cart, any cart, it doesn’t matter.

So for those of you who have been coming here for my cricut hack post and then noticed… I never updated about it again… Well, I was very disappointed to find out that ProvoCrap sued the creator of Makes the Cut. Sigh. ProvoCrap forced them to disable the use of cricut on their machine. Apparently ProvoCrap hasn’t noticed that many other companies, like you know, Sony, Apple, Nintendo, Atari etc did a little thing called “software licensing” where they forced companies to BUY a license to manufacture add ons for their products. Everyone wins. The company that sells the machine gets money and the company that sells the software makes money and most of all the consumer gets innovative products. ProvoCrap fails to see that.

Now if my Mom hadn’t bought me my cricut as a gift (shortly after her heart surgery) I’d shelve or sell the damn thing and buy a machine that isn’t crippled by it’s manufacturer and allows me as an artist to create my own designs without fear of being sued or threatened with lawsuits or “damage to my machine.” There are no issues with 3rd party content damaging machines, what a ludicris idea! Unless of course, provocraft has installed somethign on the machine to damage it IF I dare use 3rd party content. That being said I’ve been using Makes the Cut with no issue, and I will continue to do so.

Here’s the meat of my post: If you have a cricut, hack it. Screw provocraft. Seriously if you do buy a cricut, buy Makes the Cut and hack MTC so it works and don’t buy another damn cart again. It can be done. And it’s not hard. I am not posting publically how you can do this, as provocrap now sends a cease and desist to everyone who DOES leave the information out there. So, feel free to google the makes the cut hack, and for god’s sake don’t update your cricut firmware. Or do and then sue provocrap for embedding disabling software on your product.

As for blades: You can buy Roland brand cutter blades on ebay for about $2 to $3 a blade- which is a lot cheaper than buying the provocrap blades. Also, provocrap can’t sue Roland, they made these blades long before provocrap started to make the cricut. Maybe Roland should sue cricut for copyright violation. Also, good luck with provocrap shutting down the Chinese vendors of those blades.

Mats not sticky anymore? Start off by washing them with warm soapy water and then letting them dry. That will remove some of the fibers sticking to it. You can also buy a glue remover and glue system. This seems tedious, and I attempted to buy a bottle of it from a seller on etsy only to be screwed out of my money. It’s a spray glue system which of course smells bad. However, this company has a good reputation.

The best resticking option that I’ve seen so far, and has rave reviews actually uses one of my favorite glues- Zig 2 way. I usually buy the pen tip but it comes in a big mammoth pen now and the suggestion is that you wipe off the large pieces of lint with a wipe, let that dry, apply the ZIG, let that dry and then cut away. You can find this ZIG all over the place but here’s an eBay search. Zig glue is awesome.

I’d like to see a holder made for the cricut that holds a regular exacto blade. It wouldn’t be hard- a dowel seated inside another dowel so it can rotate, the interior dowel would swivel inside the housing and have a channel cut into it to hold the blade, a set screw would hold the exacto in place, and another screw on the top would adjust the blade pressure. (Someone get on making that and send me one.)

Here’s a picture for provocrap: