This week’s SSS is the amazingly fun book “Shut Your Monkey” by the entertaining Danny Gregory. If you aren’t familiar with Danny Gregory, quickly run over here and check out his blog. He’s the guy behind the book Everyday Matters  and The Creative License, and Sketchbook Skool. This 160 page volume is designed in a wonderfully fun way. Much like Gregory’s other books it’s filled with art, but this includes images of crudely drawn monkeys and a great deal of Gregory’s lettering. In short it is a quick and fun read. 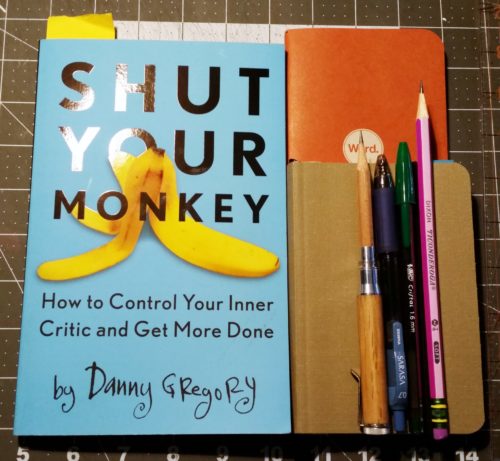 Gregory breaks down the inner critic/monkey in a way which many therapists will recognize as the ubiquitous “negative self talk” he also explores some of the classic methods of combating negative self talk- but with a fresh perspective. His perspective is purely pointed at creatives. Rather than telling people “You are an artist, “or “I give you permission to create,“ He explores real and creative manners for the artist to scoot past their inner monkey/critic/demon and start making art. He avoids all that paternalistic bull shit so many in the art journaling community* perpetuate onto one another and gives real working tools for creativity and getting work done. 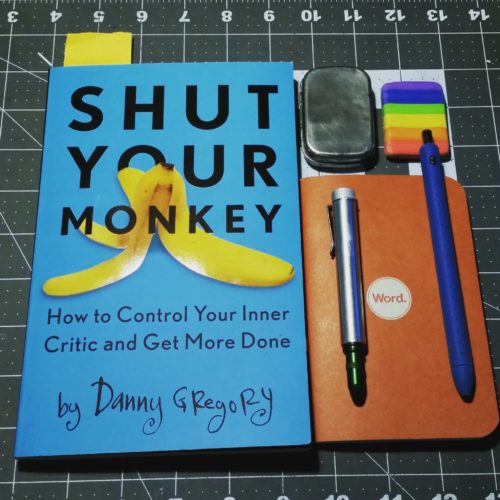 I’ve long railed against the garbage spewed by so many in the AJ community that rather than empowering others to create, ties their fan base to them in a never ending cycle of enabling rather than empowering. I’ve struggled to put a name to this phenomenon for years- boiled down it is a mix of enmeshed enabling and a need for encouragement of the fans… I digress on that topic, I could rant forever and this is about Shut Your Monkey not my issues with art journaling teachers who perpetuate enmeshment rather than empowerment.

END_OF_DOCUMENT_TOKEN_TO_BE_REPLACED

Last week we saw the brouhaha over the University of Chicago’s anti-trigger warning letter, the Tattooed Professor’s response, and generally a great deal of posting that miss the point about trigger warnings.

Today's #sundaystudy is Privilege, Power, and Difference by Alan Johnson. If this book doesn't fill you full of rage and a little self loathing you aren't doing "the work." It is an excellent review after these past few weeks also should be required reading for every person doing ANY sort of work with people, no matter their race, class, gender, or background. #secularsundaystudy

The big problem that I had with UC’s letter was that it was based on a fallacious understanding of what trigger warnings are, and follows that bad understanding to a rather silly conclusion that amounts to the dean stomping his big toddler foot and shouting, “We don’t support trigger warnings, you big babies!’

The Tattooed Professor explains what trigger warnings are in perhaps the most understandable analogy possible- they are the academic version of movie ratings. To which no one seems to argue anymore, though I must admit that I remember a time when ratings were argued against.

Here’s the thing, what is so wrong or even bad about putting content information into a syllabus? The professors should know the content of the readings (and other materials) they are assigning students to read, so adding a blurb at the start of the assignment for the day that states, “This reading contains the following: graphic descriptions of domestic violence/suicide/homicide/rape/assault/etc. PLease see the professor, privately, if this is a problem.” Or some such explanation. In some cases simply having the warning is enough for someone to prepare themselves to be reading about their particular trauma and be able to complete the assignment.

This links really well into the SSS reading I chose last week. Johnson writes specifically about dominant groups (in this case professors) being able to dictate what is considered normal in their sphere of influence and power (Ivory Tower BS/College Campus) and that when this power dynamic is shaken, the dominating group will fight back (UC Dean). Watching this play out on facebook has been interesting. I have friends who are professors and friends who could care less about college, and some of both groups have been calling the recent groups of college students “cry babies” and “wimps” due to the desire for trigger warnings and safe places.  Interestingly, most of those who respond in such a way seem to think that the desire for trigger warnings is a way for students to get out of work, but in the cases where I’ve seen trigger warnings offered there was always an alternative text or option for reading. Kids aren’t getting out of work by requesting trigger warnings, in some cases they are making more work for themselves. All that is beside the point. The point is that trigger warnings are a cultural shake up in an area that has seen a lot of destabilization in recent years (adjunct unionization, fewer faculty positions, and lower pay all around weeee) so those who are in power want to keep their precious power.

I see this as a good thing for students and universities. Anyone else miss the 90s, when politically correctness meant being kind to your fellow humans, and not the BS that has been assigned to it today?