When I started doing reviews on here I debated the smarts of posting negative reviews. I have to tell you, there are things I don’t like. There are tools that I hate and will never use again nor recommend to my friends but they are few and far between. I decided to do a round-up of stuff that made me go, meh. These aren’t bad things they just aren’t stuff I’m raving to my friends about. You may have different feelings.

The nib is fine to extra fine with no other option other than flex. You have many color options including clear. The colors all have that vegetal resin smell that to me, frankly it smells like fecal matter. I have read several reviews that this offensive odor is not offensive to all people, I happen to be of the group of people, like those that think cilantro tastes like soap, that think this stuff smells awful.

The pens themselves are nothing special, a rebranded Indian (Dollar)made pen that sells for less without the Noodler’s branding. They are light weight and feel pretty cheap. They hold 1ml of ink, almost exactly, and lay a wet even line. There is a tendency that if you are writing fast for the nib to dry out and will require a dangerous shake to get ink to flow.

This is a blue that is nothing to write home about. It’s blue, like a ball point pen and it flows. It’s not special. It does dry mostly waterproof. I found that in EVERY pen I used it in there was a tendency for nib creep. Which is just messy.

Don’t get me wrong, it’s a nice enough blue but for a 1oz bottle at the regular 3oz prize I’d rather get another blue that I like.

I bought this. Yeah, I have a drawer full of moleskins I was given for doing a giveaway on my blog years ago and I bought this because it had GRAPH paper in it. I love the look of the moleskine; the lovely black covers, the great bindings, the pocket and the place marker. I love everything BUT the paper. This paper sucks. Even my EF pens filled with well behaved inks soak through its paper, everything feathers on it and well, MEH!

Sturdy spiral binding and very sturdy covers filled with nice paper should make this a winning journal. I just can’t seem to bond with it. It’s nice, just not for me.

I used to buy these in college for detail erasing. They were the only stick erasers available then and did its job well enough. I saw one at Artist& Craftsman and picked it up. It’s just like a Magic Rub but in stick form. It’s soft and is prone to smudging stuff. Magic Rub Erasers are not a favorite of mine for this reason. It will also lift some ink and smudge that too. Meh.

This is one of the most expensive notebooks I’ve ever bought. I picked it up on jetpens because I’d heard the MIO paper was amazing for fountain pens. Guess what? It’s is, smooth, perfect for writing and nothing soaks through it but the wettest pens and there isn’t even a hint of feathering at all. Ink DOES take forever to dry on it and smudges even when the ink looks dry. The cover is cool with subtle texture and coloring. It’s small enough to slip into a back pocket, purse, or where ever. This is another one of those notebooks I should love but I haven’t bonded with and thus it sits in a drawer mocking me for the money spent on it.

I don’t like ‘em. I bought a couple of packs of them when they first came out and liked them for quick notes but they seem to dry out fast and I break the tips and they are too fine for me. It’s okay, everyone else loves them.

So that's my round up of stuff that makes me go meh.

The weather here is miserable and has
been on and off since the middle of December. As a non-essential
member of staff I am often able to work my schedule around the
weather and today is one of those days. Thank god, the idea of
driving anywhere in this garbage is pretty bad.

My father has been hard at work on the
sewing cradles on the farm in Maine. He has a bunch finished and you
can find them in the supply section of my shop. Each fits perfectly
into a USPS Priority Mail Shoes box. They now fit a 12inch high sheet
of paper and he has rounded the bottom edge for a smoother look. He's
kept the basic design and simplicity of the item. They still come in
a simple linseed oil finish, rubbed on. The linseed oil finish is
used instead of a slick hard finish so that paper will not slide
around on the wood but he natural grain and texture of the wood will
hold signatures in place while they are being punched.

I've also made a ton of matchbook
notebooks. They are 99% recycled, all the paper and covers are
recycled but the staples are a virgin material. (Many staples are
made of recycled steel but I am not sure about the heavy duty staples
I'm using.) I've switched to a 6 pack for $5.99 and will give
discounts for bulk purchases. You can find them in the recycled
section of my shop. Say I love you AND the environment by getting
someone special some recycled journal for valentines day!

My mom kicks butt. She’s who I get a lot of my crafting ability from. Growing up she was always crocheting, knitting, cross stitching, or quilting. When she and my Dad came to visit this past holiday season, I suggested she use her crafting abilities to create a colored pencil wrap with 12 pockets for pencils and a pocket for up to a 5×7 inch notebook. She picked some awesome fabrics and made the pockets extra roomy. Here are some pictures: 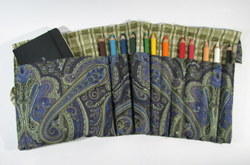 Heres a little video of one: