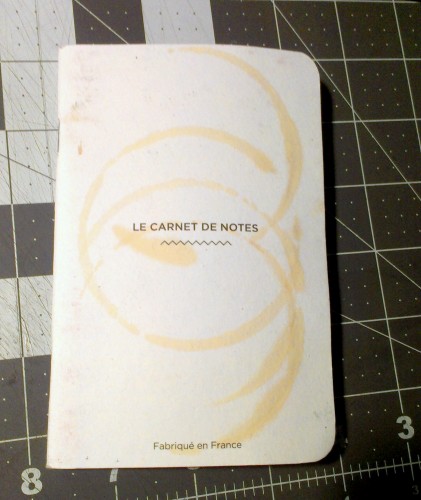 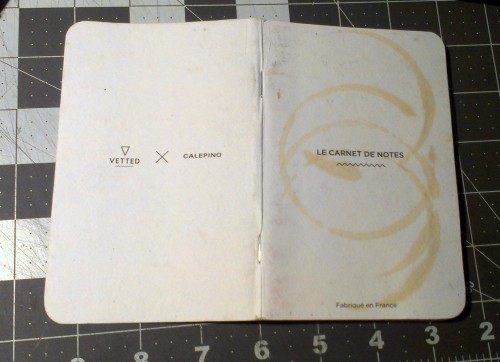 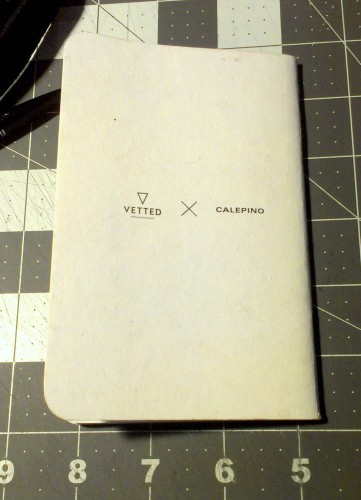 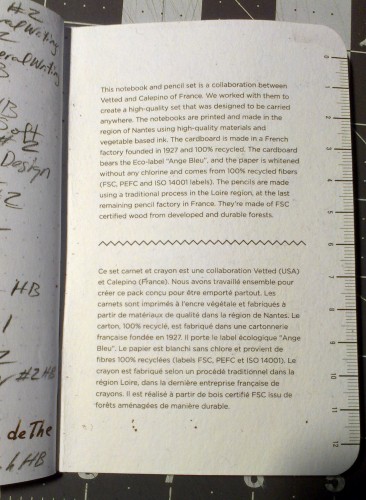 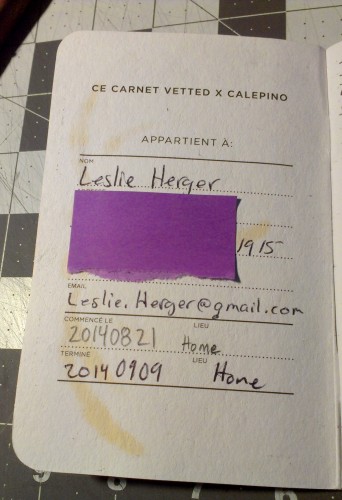 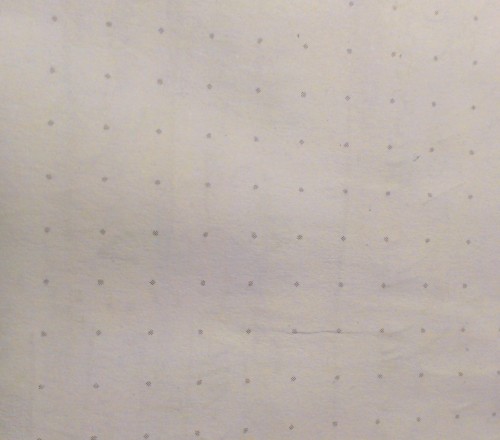 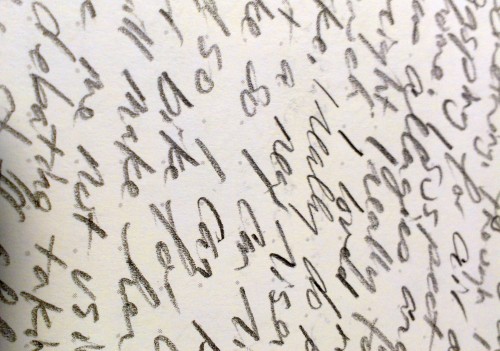 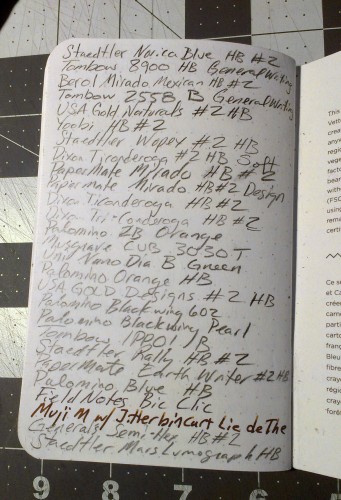 END_OF_DOCUMENT_TOKEN_TO_BE_REPLACED

The pocket sized Fabriano EcoQua(EQ) notebooks have been around for awhile and I’ve just now gotten my hands on a 4-pack at my local AC Moore with a 505 off coupon. The regular price at AC Moore is $8.99 for 4 3.5×5.5 inch notebooks. 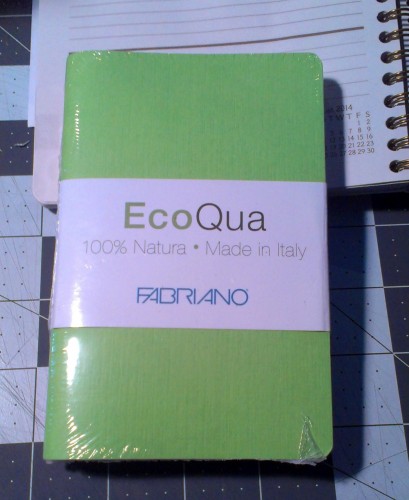 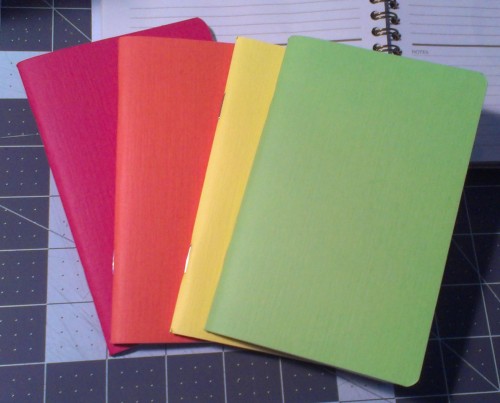 They feature 64 pages (or 32 sheets) of creamy off white paper. The paper is lightweight 85gsm paper.  The paper is amazing, smooth yet enough tooth that pencils perform well and smooth enough for fountain pens to glide over the surface. There was no feathering nor bleed through. It does take a bit for the pens to dry, but that should be expected with paper like this. Pencil smudginess was decent though not amazing.  The pages are thin enough that inks and pencils alike have a lot of show through of the previous page, while this wouldn’t stop me from sketching on both sides it might be enough to deter some users. The second half of the book is micro-perforated. I’ll discuss that later. 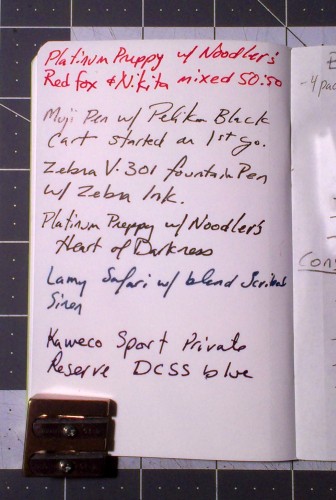 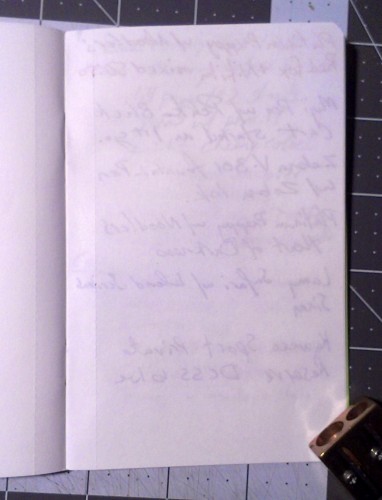 The covers are bright cheery colors with a linen imprinted finish. The cover weight is slightly heavier than a Field Notes and about the same as a Word notebook. The corners are rounded, but just barely so. The book is held together with 2 silver staples, they seem robust enough. Each of my books at the spine feature a small tear. This can be caused by several things, first the blade on the shear could be dull, secondly the books weren’t clamped tight enough into the shear, thirdly the shear was over filled finally the shear was under filled. Most likely it was over filled and not clamped down properly. This happens pretty often when small pocket books are mass produced. It’s just something to make note of and to check for if you are neurotic about that sort of thing. 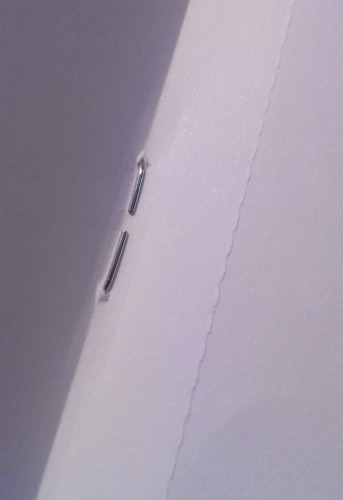 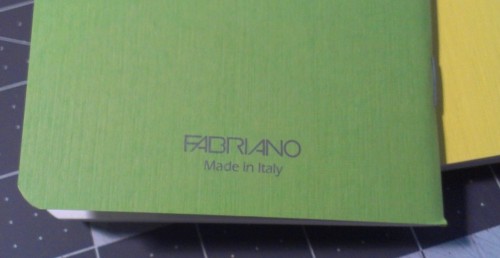 I really love the paper and the bright covers. However, the micro-perforated second half of the book is a deal breaker for me. I cannot stand to have my sketchbooks micro perforated. If I want to remove a page I have an exacto, a ruler, and a self-healing cutting mat. Or I can use my cutter bee micro perforation blade to add my own perforations. I wouldn’t mind if the last 4 or 5 pages were micro-perforated, but perforations just mean that in my use those pages will fall out. I joke that micro-perforation is Italian for “falls out with little effort.” If these weren’t micro-perforated they wold be right up there with my lovely BanditApple Carnet peewee sketchbooks. But with 1/2 of the sketchbook ready to fall out if I sneeze on them… Nope. 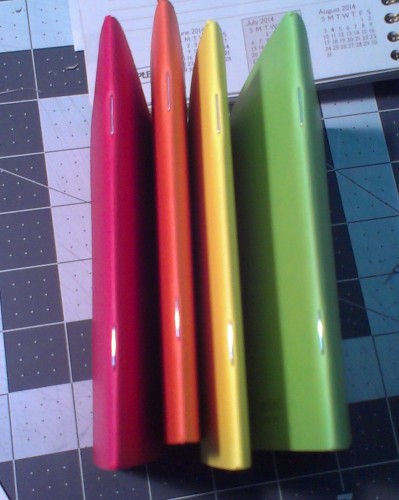 I don’t know why it’s taken the big paper companies so long to get into the small pocket sketchbook game. Clearly it’s profitable and relatively easy to do. Canson delved into this territory with their pocket XL sketchbooks, which are really not that great but are wonderful for making a lot of dreadful sketches. I’m still surprised that with the success of Moleskine and Field Notes that all the big paper companies (hello, Strathmore, Borden & Riley, and Stillman & Birn) haven’t created a simple sketchbook like this. I’d buy a 3-pack of Stillman & Birn pocket sketchooks in no time.

Instead I’m forced to use notebooks with crappy paper for sketching (I still love you Field Notes) or ordering a sketchbook from overseas (I love you Bandit Apple Carnet.)

I have been coveting a pocket brush pen for awhile. I have a brush pen but it has a incredibly long handle and is a pain because of that. I was comp shopping Michael’s when I came upon this pen. Imagine my horror when I got to the counter and found I’d left my 40% off coupon at home… I put the pen back and came back later. With my 40% off coupon I snagged this pen for a measly $10.83, which is less than I could find it online. 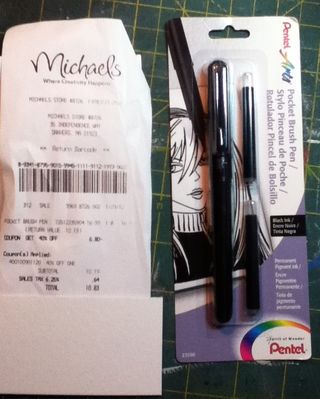 It’s sold on a blister pack like most other markers and pens are at Michael’s. Once out of the packaging its a nice looking shiny black pen. It’s comparable in size to most pens on the market. It’s very light weight even with the cartridge plugged into the pen. After wielding a TWSBI 540 for an extended writing session earlier in the day, this is like writing with a cloud. The pen is all black except for a Kanji character on the cap near the clip and the pentel name on the opposite side of the cap. 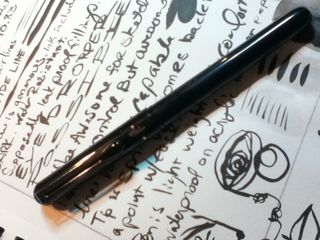 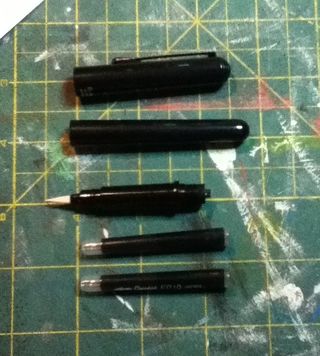 After installing the cartridge the ink descends into the brush rather quickly, the brush was fully loaded with 60 seconds of installing the cart. The tip is soft, flexible but springs to a point immediately after pressing it down fully. It is capable of giving a hair thin line or a swath of ink 5mm wide. The ink flow is generous and kept up with some very quick line work. The line variation is quite nice and relatively easy to control. 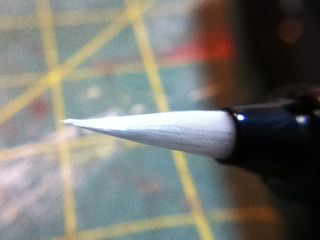 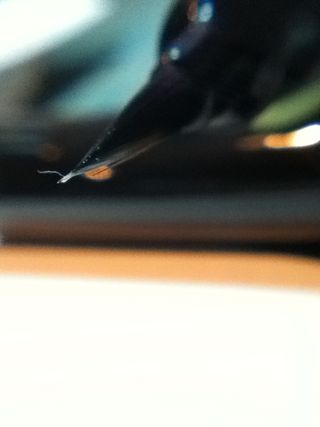 The ink in the cartridges is reported to be in water resistant. Something that I found interesting is that the back proclaims that the “fittings” are leak proof. This tells me that with some silicone grease this pen could EASILY be converted to eye dropper fill. For me, this is a VERY VERY interesting thing. In my testing I found that the ink is water resistant once dry on paper and when wet gives a very nice wash effect with a nice even gray tone. In effect you could take just this and a water brush sketching and you could do the sketch, allow it to dry, add more ink, add water and get a nice gray tone for your shadows. The ink is not water resistant on acrylic paint until it is FULLY dry. It writes without issue on acrylic, no skipping or beading up. It does take quite some time to dry on acrylic paint- to get to the fully dry point it needs a few minutes. 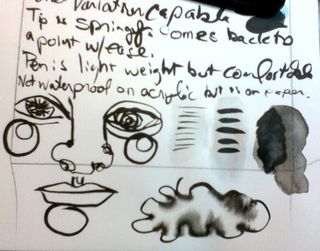 This pen is a very good price when 40% off but at full price at Michael’s I’m not sure. I’d rather put together a $25 order with Jetpens.

I'll probably do an update to this review once I run through the 2 carts that came with the pen and convert it to eyedropper style. (See update on eyedropper fill here.)

END_OF_DOCUMENT_TOKEN_TO_BE_REPLACED

Based on a recent discussion thread on the HedgehogsForever group I decided to try my hand at making a hedgehog with expanding pockets inside instead of pages. It went reasonably well.

The  experiment with the expanding pocket notebook was to see how hard and how long it would take me to make one. The results are cool but they take forever and are complex to make as well. There are a lot of steps one could foul up. And of course the one I made is good, but I fouled up in 2 spots- first I trimmed the cover too small and secondly I made the pockets a smidge too small for what I wanted to do with it- keep my jotters in it in my bag. I forgot to add ¼ inch to the dimensions to make it work correctly.

I used stiff cowhide for the cover, backed it with my favorite paper of all time- a green Japanese paper with a screen print of clouds. I love it. I used cardstock for the pockets, folded and scored them to open out to a pocket ½ in wide. It worked well. From the outside the pockets look just like a regular hedgehog. I made the pocket 3 inches deep instead of 3.5 to keep the size of the pocket true to a hedgehog.

IF I were able to fit my jotters in it comfortably I would certainly use this experiment, but as it won’t fit them I’ll keep it kicking around for awhile. I’ll figure something out for it. 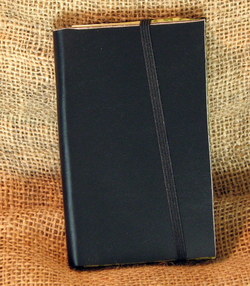 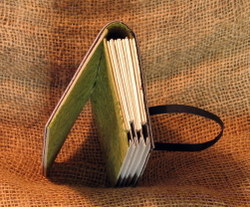 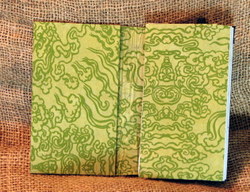 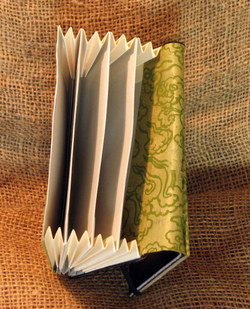 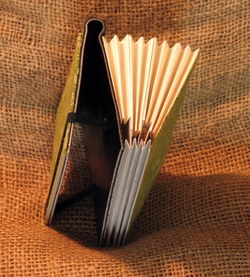