Whew. In addition to mowing the lawn* I managed to finish that fat stack of 7 hedgehog/ moleskin notebooks I've been sitting on for close to 2 weeks. The elastics and envelopes went in in no time and pressed for a few hours. In that time I glued 6 more blocks into leather covers.

I pulled the finished books out of the press, signed and dated them, stuffed business cards in the pockets and then shot pictures. Edited said pictures and then listed all the items to my artfire shop. It went smoothly and everything looks good.

Thursday I visited my friend in Swampscott and she had been hoarding some paper and advertising posters for me. I walked away with 20 or so posters and about 2 reams of paper. I'll be able to use the guillotine to chop them up into nice matchbook notebooks. The posters are already chopped to size and will be stored until the next time I make a big batch of jotters. I also got some plastic posters that I use for jigs. I set up a jig to make covers with some of the left over scraps as the spine with some great backer board as the cover. I picked up some 30×40 sheets of backer board at the Charette clearance sale in Woburn.So I'm going to try out some new books and stitches. Fun stuff planned.

Tomorrow I'm headed to Western Mass to help a friend set up an ArtFire and an Etsy shop. I"ll spend the afternoon testing out my skillz.

*no small feat considering that it's rained every weekend for the last 3 weeks and I've not been able to mow for that whole time. The grass was halfway to my knees and I"ve got an electric lawn mower… It wasn't pretty.

The first book most binders are ever
shown is the simple pamphlet binding. Its fast easy and can be made
pretty. There are 2 variations that I'm fond of, the 3 hole and the
figure 8. Each is exactly what it sounds like, the name does not
deceive.

Here are some links to good references
on these bindings:

This a link to a hand out using the
hole stitch and a single sheet of paper folded.

TJBookArts has a great list of
tutorials, many are single signature, perfect for a months
journaling:

Hey Lucy's instructions are the easiest and could be adapted to anything you want, but I like the Stanford, though stuffy,  it's shear amount of information and 2 signature options a the best for the art journaler.

On Tuesday I found a few old posters at work, I asked the
representatives about them, if they were to be used again all said no and that
I could have them. I knew that at least one of the posters was at least 3 years
old, the other at least 3 seasons old. I knew in advance that they wouldn’t be
used again. Bringing them home I tried to figure out what I was going to do
with them. I knew that I wouldn’t be able to glue to them- one was a thin sheet
of plastic and the other typical vinyl coated ad glued to thin foam core.
Neither of which would take glue well, I knew it was going to have to have
Coptic stitching to use these posters.

SO I cut them all up, somewhat randomly to 3.5×5.5 inches
and then punched a series of 4 holes in each cover. I also matched up the
covers with some recycled backer board (very much like book board) that I had
saved from packages of tags also from work.

I expected that I wouldn’t have a chance to work on any of
these books until Friday, when I was to have my 2 days off. Instead I caught my
significant other’s cold and I have been sick and I’m still ill. It’s one of
those head colds where concentration is difficult and “stuff” comes from
sinuses. Let us not talk about that. Let’s talk of pleasant things like Coptic
stitching.

It’s been awhile since I’ve done any style of Coptic stitch,
other than long stitch. I’ve been quite caught up in this recycled thing. So
I’m out of practice and on the first 2 books I made, it shows. The first one I
made was a standard 2-needle sewing done twice. The first set of stitching went
well and looked great. I started the second set and it went well until the last
signature. Where I forgot myself (James Bond Double OH Days of Christmas on
Spike- my favorite cold weather TV marathon) and pulled in the wrong directions
with too much tension. The combination of DayQuill and James Bond made me want
to find a bad guy to toss it at to distract while I got away… (Only partially
kidding, DayQuill does make me a little loopy.) I patched it up and cursed the
fact that I had tied off the other set of stitches already, because if I hadn’t
I would have been able to simply remove the bad signature and attach the cover.
Ah well. See some pictures of my mistakes below. 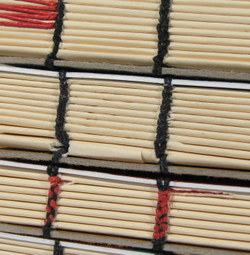 The next mistake I made was when I decided to attempt a
particularly difficult Keith Smith stitching where you attach the covers to
each other first and then stitch on as if you are sewing onto cords. Instead of
attempting this sewing with a single cord I attempted it with a double cord and
a pack. Here again I blame the DayQuill for giving me a sense of ability far
beyond my 2 year lay off from a stitch. It’s far better to practice a stitch a
few times before attempting it on a cover you like. It’s also better to
practice on easier stitched before attempting something so… Difficult. (Before
anyone leaves a message scoffing at the difficulty of said stitch I implore you
to go take a dose of DayQuill, fill your nose with mucus, smack your head with
a hammer and get back to me after attempting any stitching.) Again check out
the picture below. I realize now looking at the picture that though I wanted to
do a loop and pack I didn’t pack as I had intended. Go figure. 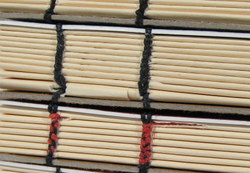 The next 4 books were very successful 2 single needle
coptics, one with a larkspur and braided linen book marker, one double needle
stitch twice on the spine and a particularly interesting spine with black
leather “split tapes” with a stitch and pack on them. The leather is then
stitched onto the cover. For all the work that book was it’s my favorite. I
love the binding and it just looks great. The red on black is a great
combination and the dense heavy stitching is fantastic as well. 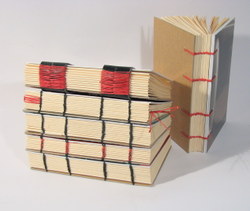 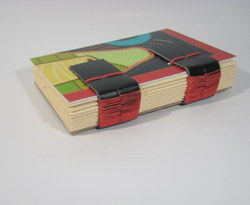 I fell in love with the book with the coffee cup and coffee
beans. I managed to punch the holes on it upside down but still I love the
cover and I’m keeping that one for me, a little feel better soon gift to
myself. 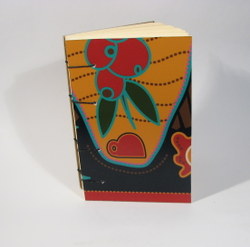 Each is filled with 200 pages of Wausau opaque in ivory,
unlined, acid free paper. I cannot vouch for the archival or acid free nature
of the covers. I did test the backer board and it is lightly acidic. The
stitching is all done with hand waxed Irish linen thread, unbleached but dyed.
The 3 books without imperfects will be up on etsy later today and I’m deciding
what to do with the 2 books with imperfections. I’m considering putting them up
on eBay as a set. Or maybe something fun.

So you came to my blog looking for items to buy that
bookbinder on your Christmas list? Well here’s what I would get that person,
from a bookbinder to a bookbinder:

#1 A selection of fine Irish Linen threads. There are
several things to consider when buying thread, size and color. A good size to
go with if the person does bindings where you can see the thread (exposed spine
bindings) is 12/3 and wonderfully enough JohnNeilBooks.com has a great
selection of colors in that size. I’d go with the basics: natural, black and
red. It’s a good starter selection.

#2 A selection of knives, sounds odd under the Christmas
tree or wrapped for Chanukah but a nice knife will last a lifetime and get
hundreds of hours of use. I’m particular to a few knives myself- my Olfa brand
click knife. The body is steel wrapped in plastic. It’s comfortable and
strong. Next on my list is a simple box
cutter. You could decorate the body of the cutter with paint, fabric etc. These
are available at any home supply store or even Walgreens. Lets not leave out
the illustrious exacto knife. If you person has been crafting for any amount of
time they probably have one, but you could get them a new fancy handle or a box
of 100 blades.

#3. Bone folders. I’m not sure if this ranks up there with a
knife in terms of oddness under the tree but my bone folder has seen hours of
use and is one of the few things that I’ll search for and clean off my bench to
find. There are a bunch of different shapes out there but the basic 8 inch or 6
inch folder with one pointed end is the best.

#4 Instruction books. Often bookbinding books are hard to
find. Barnes and Noble has a notoriously crappy selection with Borders
following them up with a just slightly better selection. Check online for
better selections. Alisa Golden’s books are fantastic; Shareen Laplantz’s books
are also awesome. If the binder is more advanced go all out and get them some
Keith Smith, just be aware that the rest of the holidays will be spent intently
pouring over the books. (Keith Smith books are like pr0n for the active
binder.) I just purchased a new beginner’s book by Ester Smith. It’s a good
book to start with has great pictures and a lot of diagrams.

Phew I’ve had a long day at the DayJob, But Sunday I listed
this item on eBay. A combination of jotter notebooks with some sort of
advertising lettering on them, most are in lighter and brighter shades. Inside
they have 48 pages of 24lb Wausau acid free paper in Ivory. Each measures 3.5
inches wide by 5.5 inches high. These are just light weight enough to fit
perfectly in a back pocket and form fit to you.

I use one everyday. My day simply doesn’t run smoothly
without on. I use it to keep track of day to day activities like the grocery
lists, things I need to do at work as well as notes for blog entries and big ideas. 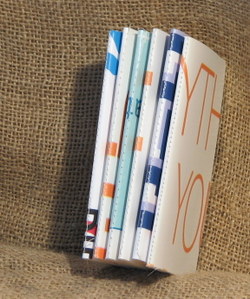